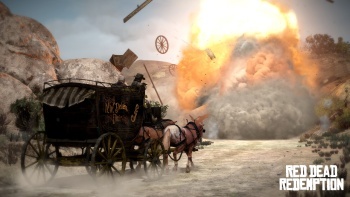 The final few hours of the main narrative Red Dead Redemption are poignant and unsettling. John reunites with his family, resettle his farm and sets about attempting to live a normal life. His missions become mundane, even boring. He herds cattle from the ranch of someone he befriended in his travels. He teaches his son how to hunt, then rescues him after he goes off on his own to kill a bear and gets into trouble. He wrangles wild stallions with his old ranch hand, Uncle. These are all things you will have done before, as you employed John Marston's deep pool of natural resources in order to enlist the aid of strangers in accomplishing your mission to apprehend or kill your old gang members, but in the context of having accomplished that mission, they are more than simple missions and simultaneously less. The game seems to be saying "this is your life," and, while it is rewarding to be able to enjoy the fruits of your long labor, it is also a bit disheartening.

As John Marston, bounty hunter, government agent and occasional outlaw, you climbed mountains (literally), hunted wild animals and wilder men, cleared entire villages of outlaws and banditos, fomented a revolution and helped propel a Mexican guerilla fighter to the seat of his country's power. You hunted and killed your best friends and left hundreds or even thousands of bodies in your wake. And your reward is what? To herd cows? To sleep in a bed with a woman who will barely say hello, and share a meal with a son who hates you?

To say that this part of the game is letdown would be an understatement, and it creates the very real possibility that, bored of these soul-sucking tasks, you, as John Marston, will head back into the hills to indulge in your previous passions, that you will take up unfinished challenges like hunting bounties, or killing the last of the buffalo, that you will, in fact, backslide in your effort to redeem yourself and begin to act like the outlaw you've always been. You may even end up causing more mayhem than you have to this point, resulting in spending more time being hunted by posses, more time in jail. I did. Yet after I was released, my family was still there for me, waiting for me to take up the mantle of father, husband and rancher. The game, too, never lets you forget that it's time for you to set aside childish things, by refusing to allow you to change from your rancher clothes into any of the outfits you've unlocked along the way. It's as if it's saying "This is your life" in yet another way, one that's impossible to ignore.

The game doesn't end there though. It has another trick up its sleeve. Fulfill all of your obligations to your family and the game turns the tables once more by attempting to deprive you of them. You will fight the fiercest battle you've ever fought here, near the end of this remarkable game, as the US Army arrives to finally claim the last of your soul, or kill you in the process.

How the game plays out from here is pre-scripted and you cannot change how it ends no matter how hard you try. You are not playing a role at this point so much as you are watching in horror as events unfold in ways you would never in your wildest dreams have imagined. It's possible to save your family, but you will not save yourself. You will die at the end of this mission, and you will be buried by the son you saved, the son you once scorned, who scorned you, but who, in the end, will ultimately avenge you. While you can't change this narrative, can't prevent your son from having to bury his own father, or even affect how you meet your eventual end, what kind of person your son buries - outlaw or savior - is up to you. Although Red Dead Redemption is not a role playing game in the strictest sense, I challenge you to watch its ending credits roll without feeling, at some level, that this tragic life you shared momentarily was, at least in part, your own.

Russ Pitts is the Editor-in-Chief of The Escapist. He is currently at 96.5% completion in Red Dead Redemption.