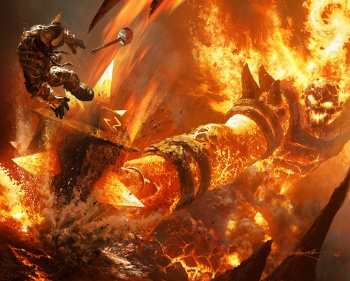 So am I disappointed that Blizzard's plan to mandate compliance with RealID failed to come to be? Not really. As I've said, I don't have a dog in that hunt, not really. I think it may have been a great first stab at taming the wilds of the public spaces of the internet, for sure, but it's not the first stab I would have recommended and, frankly, I think it was a moronic move for Blizzard, a company that's created an empire off the sweat and tears of a very active and vocal community of obsessives who crave the shadows of online anonymity the way fat girls crave cake.

Think about this: Who, really, is spending all of those hours in WoW? We all know relatively stable, well-adjusted "normal folk" who craft and grind on the weekends and raid a few nights a week. Ok, fine. Listen, my parents belonged to a bowling league when I was a kid. Is there a difference? I don't think so. Both hobbies are kind of lame in their own ways, but give people pleasure and a sense of community and the sense that they're contributing to a meaningful struggle of some kind. Bowlers pull together to strike and spare their way to a trophy and the envy of their neighbors. Guilders do it for the same reasons, only their neighbors are all over the world.

Most people I know who play WoW can look you in the eyes and talk about the experience. These people, by and large, don't care that much about RealID. Maybe they'd prefer to not have their secret identity spoiled, but they would most likely just find another hobby if they couldn't live with it.

The people who have the most to lose from a system like RealID are the people with a vested interest in maintaining the integrity of their virtual life. Those who have, for whatever reason, come to believe that that their virtual existence is sacred, that it serves to elevate them from the squalor of their daily existence and that by tying their virtual identity to their daily existence would be to sully it with the feelings of insecurity and personal shame that cloud their every step in the natural world. For these people, RealID is a threat to their very way of life and would spell ruin to the one thing that grants them a feeling of accomplishment and joy - a virtual world where they can be someone other than themselves. Someone better, more social, more accomplished, more loved.

I do think it represents a sad state of affairs should one feel the need to seek it out anonymously, in a make-believe world, and that doing so may seem to be their only option, but I don't pity those in that situation. I pity those who have driven them there, the real-world versions of the repugnant internet assholes RealID was designed to eradicate. I reserve my pity for those loveless, senseless blights on the soul of mankind. My pity and my hate.

Russ Pitts is Editor-in-Chief of The Escapist.