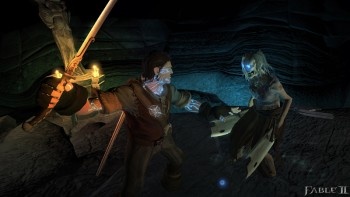 So our narrative has a basic three-act structure. Onto that structure, we map an escalation of moral choices. In the first act, you make small, incremental choices that serve as input to the game logic. These choices tell us what kind of character you want to play and what path you want to pursue. But these are still small choices, so they don't have huge repercussions and you still have time to change course. In the second act, we take that input and offer missions accordingly. The choices you make in this second act drive towards the dramatic resolution of the bad-guy gang but also represent a hardening of your path. It's going to take a lot more work to change your path after act two. In the final act, your path is pretty well set. But in the climax we throw in a twist that gives you one last chance to ditch your current path.

How? Let's start with act one.

In act one, we give you a wide variety of missions with which to make choices. Let's decide to track four moral traits about your character. Each one has a positive and negative aspect:

During the first act, each of these traits is represented numerically on a range of -10 to +10, where -10 is the negative aspect and +10 is the positive aspect. A given mission may let you alter your position on any or all of these traits by 1 to 5 points. If the schoolmarm complains that the town drunk is disrupting her class you have the opportunity to beat him up, or you can talk him into taking his drinking someplace else; that would move you 2 points in one direction or the other on the Vicious/Peaceable trait.

(Why four traits? A simple Evil/Good trait would be easier. But it's important to let the player express how they see their character with more shading than that. Practically speaking, this approach also gives us a clear guide for content creation. Our writers will construct missions that play to these four different traits instead of each mission's just being a hero/bully test. That approach is far more interesting and provides more choice for the player.)

Each mission in the game can be turned on or off based on your values for these traits. During act one, we always keep plenty of 1-2-point missions available so you can push these traits as you like. But whenever one of your traits reaches +/-5, we turn on a couple of missions that are worth 3-5 points for that trait. This gives you the ability to max out any given trait by taking a more extreme mission.

The end of act one is triggered by your completing some important storyline missions and reaching +/-10 in at least two traits. You've now given us clear guidance about how you want to play this character and we're ready to move to act two.

During the second act, these same traits now run +/-100, a tenfold increase. We turn off all the 1-2-point missions because they're not worth enough. But we keep the 3-5-point missions and turn on new ones worth 10-50 points.