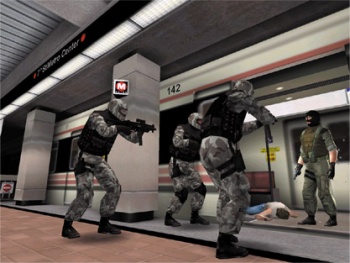 Amazingly, it worked. Depending on the enemy's morale, you could get a bad guy to drop his gun, put his hands up, and kneel on the floor. Then you could press another button to handcuff him and summon backup to escort the guy out of the situation. Whenever I encountered an enemy and I had cover, I'd bark orders at him. If he didn't comply, I'd open fire. After a few shots, or if I downed one of his partners, I'd give him another order, and sometimes then he'd comply. If I failed to handcuff him soon enough, though, he might get back up and grab his gun.

This was great. I was actually able to get bad guys to surrender instead of just shooting them. It was incredibly satisfying and also benefitted me tactically, since I could take enemies out of the picture without exposing myself or my teammates to danger. But this approach didn't catch on. I haven't seen this kind of verbal intimidation mechanic elsewhere.

However, that feature had its drawbacks. It did not express character, nor did it present story. Yet this always-available form of talking had a lot of potential.

Now I think we can answer the question: why talk in games? Because just like dual-wielding and leaning around a corner and every other control we've added over the years, talking can expand our player toolkit and give players more ways to solve problems.

How Can This Be Interesting?
I think SWAT 3 shows the way here, because the best reason to talk in a game is probably persuasion/coercion. As a player in a game trying to solve a problem, you need to marshal every resource the game provides - and other characters are definitely resources. When we add the ability to arbitrarily persuade or coerce other characters into doing useful things, you can solve more problems in more ways.

We see the persuasion/coercion model in Bioware games, where many quests require you to convince someone to agree to something. But outside of quests, the model doesn't exist.

Here are some examples where adding talking as a core control could improve gameplay:

Action Games: This one's easy. Halo, for example, already does a nice job with morale for the Grunts, minor enemies who will flee if they suffer too many losses. Sometimes their incidental dialog even addresses their fear of you, the legendary human warrior who has killed so many of their kind. Think of the action movie trope where the tough hero faces the cowardly no-name thugs and sends them running away with a growled threat. A more interesting example would be persuading frightened civilians to do what you want: take cover and hide, for example, or follow you, or give you a first aid pack.

Fighting Games: With all the moves and combos in fighting games, it's surprising there aren't controls for verbal threats and yells. Adding verbal elements to attack combos would be great, so that a flying kick with a "HII-YAH!" would actually do more damage, and a roar of defiance could help break a hold. A single button for verbals with contextual phrases would be a blast and would definitely help to express character. It could even express story: imagine that when you press the button while across the room from your opponent, the contextual phrase is, "I will avenge my father's death!" or "How dare you attack our peaceful village!"

RPGs: Haggle with shopkeepers. Intimidate enemies in combat. Disclose plot points you've recently learned to persuade reluctant allies ("Soylent Green is people!") or make your foes panic ("I am the Kwisatz Haderach!"). If nothing else, your character can make a quip or deliver a catchphrase appropriate to the context purely for entertainment or to put a fresh spin on a common situation. (If you're playing Uncharted, wouldn't you like a "Be a Smartass" button so Drake could crack wise when you felt like it?) In all cases, talking is how you work your will on those you meet.