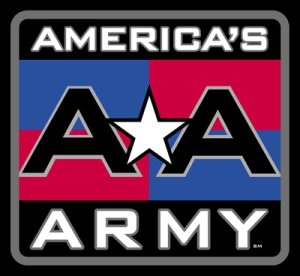 Jack Thompson is at it again. His most recent hysterics revolve around the "unholy alliance" between the United States Department of Defense and the videogame industry, which he says is teaching kids "that war is glamorous, cool, desirable, and consequence-free." But despite the glaring nonsense, it has focused attention on an issue that some people, particularly non-gamers, find controversial and in many ways disturbing: The use of videogames as a recruiting tool for the United States Army.

A brief recap: In 2002, the U.S. Army released the first version of America's Army, an Unreal-powered first-person shooter that purported to offer a "realistic" look at the firearms and tactics currently in use by the military. The freely-available game was initially developed to bolster both public relations and the ranks, but proved immensely popular with gamers and quickly became one of the most popular online shooters available. Following that success, numerous updates and news versions have since been released, including ports to Linux, Mac OS X and the Xbox 360.

But the game's propagandistic roots remained, and in light of the ongoing wars in Iraq and Afghanistan, actually grew in significance in the eyes of many. While most gamers saw it as nothing more than a cool (and free) shooter, questions about its efficacy in selling the army to the next generation continued to hang overhead. Thompson's penchant for the spotlight notwithstanding, legitimate concerns were being felt.

It may not be surprising that a federally-funded videogame promoting the Army life is looked at somewhat askance, but the fact is that it's a long way from a concerted effort to turn children into the dead-eyed, remorseless killing machines of the future. Aside from being impossibly paranoid, it also overlooks one simple fact: This is nothing new. 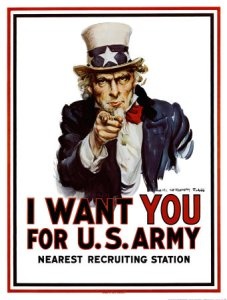 "Join the army" jingoism has been with us for over a century, and while formats have changed, the message, and the target audience, has not. Easily the most famous of these efforts is the stark "I Want You" series of posters featuring a scowling Uncle Sam jabbing his finger directly out at his audience. Originally based on a 1915 British poster, the iconic American image was created in 1917 to encourage enlistment for the country's entry into the first World War, and then brought back to serve the same purpose for the second World War.

The advent of television led to changes in how the Army sought to fill its ranks, with televised ads urging viewers to "Aim high" and "Be all that you can be." These were staples on the tube for years, and last I checked the Marines are still looking for a few good men. My own memories of such efforts from my days of youth include listening to a barrel-chested "Queen's Own" chorus booming out "There's no life like it!" in a sad attempt to convince people to sign up for what little remained of the Canadian Armed Forces. It didn't do much for me; helicopters and machine guns are cool, but being alternately yelled at and shot at, in my estimation, is most definitely not.

Recruitment through the use of America's Army (and, to a lesser extent, Full Spectrum Warrior) is simply the next step in the ongoing evolution of military advertising. Recruiters have to follow their audience; posters appealing to a sense of duty and sacrifice may have been adequate a half-century ago, but society and the nature of human interaction has changed. Just as "King and country" has been supplanted by dental benefits and a college degree, so to have the methods of getting and keeping the attention of potential enlistees shifted with the times.

MovieBob - Intermission: I Wrote That Crap (For America!) MovieBob 50 Comments