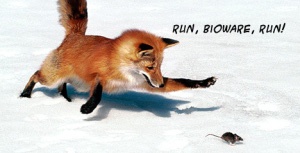 For almost as long as there have been videogames, debate has raged over their worth as art. Be it early text adventures or the latest high-tech simulations, long-winded discussions about the artistic merit of interactive electronic entertainment have been as close as the nearest message forum. But there's a more fundamental aspect of our hobby that's undeniably true and yet often overlooked: Art or not, it's all business.

No one in the industry today embodies that ethos as purely as Electronic Arts. The world's largest independent videogame publisher, EA has long been the number one public opinion whipping boy among gamers, a kind of Evil Empire whose cold, voracious eye is a threat to all it falls upon. And the fate of those smaller fish swallowed up by the leviathan is often unpleasant, because EA doesn't just acquire: It destroys.

Long-time gamers will have fond memories of names like Westwood, Bullfrog and Kesmai, three standout development studios from the early days of PC gaming. Bullfrog and Westwood were behind long-ago hits like Populous, Syndicate, Magic Carpet, Command & Conquer and Eye of the Beholder, while Kesmai was a pioneer in online gaming, launching Air Warrior, the first graphical MMOG, in 1986 as well as other early multiplayer titles for the CompuServe online service. But despite their pedigrees and status, all three are gone now, victims of assimilation at the hands of EA.

On the surface, it's a shame and a loss. The talent, diversity and creativity of these three studios were a boon to gamers; not every release was destined for greatness, but there was always a feeling that every release at least had the potential for it. New ground was being broken, new genres were being invented, and these three studios were at the forefront of it all. Who knows what they could have accomplished if they had been left unmolested by the faceless, soulless corporate giant?

Which is why it's so easy to forget that Electronic Arts, the Great Satan, was right there with them in those heady days, laying the groundwork of gaming culture long before the mainstream even thought to give it a second glance. In fact, to be a little pedantic about it, EA was first, blazing a trail for everyone else. Westwood launched their first title in 1986, while Bullfrog didn't get down to business until 1988; Electronic Arts, on the other hand, started in 1983, putting out a few titles you may have heard of: Pinball Construction Set, Dr. J and Larry Bird Go One On One, Archon: The Light and The Dark and a little something called M.U.L.E.

EA also took an unusual approach to its relationship with developers, impractical in today's era of large-scale development but emulated to some degree by oddball publisher Gamecock. They put dev teams front and center, highlighting them as the creative forces behind the games, with names and photographs of individual team members included on game packaging and, in some cases, even featured prominently on the cover. It was part of EA founder Trip Hawkins' plan to attract the best talent in the industry to his publishing house, and it worked, with revenues growing from $5 million to $11 million to $18 million over the company's first three years of existence. Electronic Arts' roots as one of the earliest supporters of independent game developers can be difficult to reconcile with its current reputation for merciless profiteering, but there's no question that without its efforts, some of the finest and most groundbreaking games of that era would never have seen the light of day.