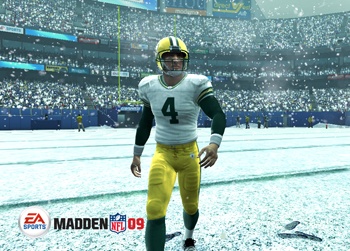 If 2K Sports had been able to similarly procure the NFL license, it likely would have been met with little more than curious indifference, and perhaps a muted cheer from some quarters over EA's flagging fortunes. If a top-notch game had failed to follow, it would have tanked on the sales charts and quickly slipped from notice, much like the previously mentioned and non-officially-licensed All-Pro Football 2K8.

Such an outcome would presumably leave a hefty number of disappointed sports game fans but I very much doubt that litigation would be the result. 2K gets attention for everything Rockstar does, and is largely ignored for everything else, but it's never been characterized as "evil." Electronic Arts, on the other hand, has. Often. On a good day, the company is regarded as indifferent to the interests of gamers; on bad ones, rumors are whispered that its game manuals are printed on the flayed skins of dead kittens.

Unfortunately for the pair behind this suit, "EA sucks" isn't grounds for civil action. Electronic Arts may play hardball with the football, but it's not doing anything that isn't being done by everyone else in business: Taking steps to secure and advance its position in the marketplace. Did EA executives feel just a wee touch of glee at the prospect of turning the screws on their 2K counterparts? Probably. But licensing deals are all about gaining exclusive rights at the expense of the competition, and in an industry that relies as heavily on high-profile licensed products as ours, they're not just commonplace, they're essential.

And if EA wants to charge 50 bucks for its game, what of it? We're not talking about food, fuel or shelter here; Madden NFL 08 is one videogame among many and EA is free to charge what it wants for it, just as consumers are free to not buy it. That's an important point as well, and pretending that John Riccitiello popped by the house one day and put a gun to our heads to force us to buy his game isn't going to fool anyone. People buy new Madden NFL games year in and year out because, pissing and moaning notwithstanding, they think they're worth the price being charged. Isn't that how it's supposed to work?

Indifferent consumer reaction to major EA Sports releases across a wide enough audience would definitely get the company's attention. Games are business - we talked about this earlier, remember? - and what matters in business is money. If consumers really are sick of paying HBO prices for CBS shows, the smart move would be to stop throwing money at EA. A significant decline across the company's flagship titles would raise a few eyebrows and might even serve as a catalyst for real innovation. But with more than 4.5 million unit sales worldwide for Madden NFL 08, the likelihood of that happening seems awfully slim; and two guys looking for legal redress in lieu of a sufficiently friendly price point just looks foolish and futile.

Andy Chalk lives in Canada, so maybe he just doesn't "get" this lawsuit business. Feel free to contact him to explain why he's wrong.