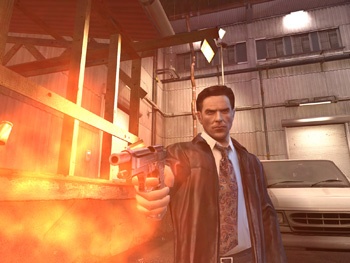 Summer is upon us, that hot, sticky time of year recently described by someone - I forget his name - as "the season when bugger all's coming out," and so inspired by the spirit of all the retrospectives that have been popping up around here I decided to have another look at one of my own all-time favorites from a few years back.

Taking place two years after the events detailed in the original, Max Payne 2: The Fall of Max Payne finds the titular character living in squalor, still tragically broken by the murders of his wife and infant daughter and shuffling numbly through his days as a New York City Police Department detective. Stumbling upon a vicious murder carried out by a gang of rogue industrial cleaners, Max finds himself drawn into a twisted conspiracy swirling around a Russian gangster, a low-level Italian mafioso, his icy partner, his violence-prone lover and a secret society known as the Inner Circle.

We may as well get one thing clear right from the start: Max Payne 2 kicks ass. The original Max Payne was smokin' hot, but the sequel takes matters to a whole different level of awesome. It maintains the gritty feel of the first game but tones down the heavy-handed noir parody, choosing instead to explore a more seriously realized Max Payne, a shattered man who lives through each day simply by default.

A lot of games these days carry a "Mature" label, typically for violent content and very rarely because they're actually mature in any real sense of the word. Max Payne 2 dared to break that mold; the violence is still very much intact (and cool), as are all the elements of a typical action thriller, but the game goes beyond that, examining the motivations of a "hero" who's been irreparably broken by the events of his past. Max butchered over 600 people in revenge for his family's slaughter and came up empty; he's still alive, his loved ones are still dead. He exists in isolated squalor, unable to form connections with the people around him but so desperate for human contact that he calls phone sex lines just to find someone to talk to.

It's powerful stuff, and it only builds from there: The plot twists and turns on betrayal, anger, love, redemption and loss, as Max discovers and clings to the strength he needs to escape the hole he's fallen into. As the game progresses, Max becomes palpably more alive, until the final, devastating and perhaps inevitable conclusion that leaves him lost again, yet still holding his faint glimmer of hope.

But beyond being all that and more, the most amazing thing about the game is this: It sold like deep fried dog poo.

Despite unmitigated awesomeness, despite being the sequel to a hit game, and despite widespread critical acclaim, Max Payne 2 managed only a fraction of the sales of its predecessor. Take-Two, the game's publisher, referred to it as "disappointing" and said it wasn't expected to achieve sales targets set by the company. It wasn't a total disaster. Developer Remedy is still in business, hard at work on Alan Wake, but the game definitely failed to live up to expectations, and with the exception of a 2004 announcement of Max Payne 3, nothing has been done with the franchise since. (Oddly, while Max Payne 3 remains little more than a distant hope for fans, a Max Payne movie starring Mark Wahlberg, Mila Kunis and Ludacris is currently in the works.)

Heroes Are Born, Not Made The Wooster 25 Comments