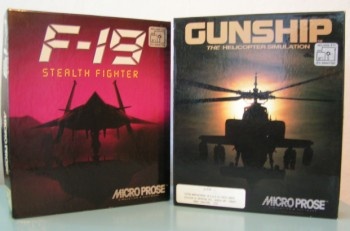 The first videogames I ever bought for a PC were the late 80s Microprose classics F19 Stealth Fighter and Gunship. They weren't just amazing games, they were amazing objects: Big, sturdy cardboard boxes, instruction manuals that weighed about 12 pounds, keyboard overlays to assist with navigating the complex controls and glossy catalogs advertising the many other games produced by the late, lamented simulation company. Long after I stopped playing them, they remained in a place of prominence on a shelf near my computer, stacked side by side in the company of newer, although not necessarily better, games.

Inevitably, space on that shelf ran short, so I did what struck me as perfectly normal: I bought another shelf. And then another. It didn't seem like particularly odd behavior to me. These were my games, and I had to do something with them, right? But it took the passage of more than ten years, and the release of Baldur's Gate 2, for that poorly-defined "something" to crystallize into something.

Along with the standard version of Baldur's Gate 2, you see, BioWare saw fit to release a limited Collector's Edition, and given how enamored I was with the original game, I bought it. While fawning over the game's bonus contents and staring at the holographic edition number on the back of the oversized box (56,135 of 62,000) I was suddenly hit with an epiphany. This is a collector's edition. I'm a collector!

In that instant, a decade's worth of games went from pack-rat crapola to evidence of a higher appreciation for the artistic medium of videogames. As a collector, I was legitimized; I was no longer an obsessive nerd, I was an early curator of an exciting, groundbreaking new form of expression, with a depth of commitment that would allow me to waste a significant amount of space (not to mention money) in the pursuit of ever-expanding digital creativity.

But one thing collectors of all stripes have in common is a burning need to catalog and track their collections, and in this, I always fell short. Keeping an inventory is half the fun, and my inability to find a satisfactory method of doing so gnawed at me. I tried freeware database software, commercial programs, half-assed spreadsheet setups and more, but nothing ever fit the bill quite perfectly enough to make me happy. There was always something missing, something not quite right, some little nit I had to pick, and as a result I would inevitably throw my hands up in frustration, sulk for a while and then forget about the whole thing - at least for a few months, after which I'd start the whole process all over again. And then I found RF Generation.

A website that caters to collectors of "classic and modern videogames," RF Generation was launched in April 2004 by former members of the defunct Video Game Bible website. Despite experiencing steady growth since going online, RF Generation remains a small, closely-knit community, offering forums, blogs, online games and more. For all that, though, what really sets it apart from other gaming sites is a comprehensive suite of game-specific collecting tools and its beefy database of classic videogames.

"I would say the collection database attracts most of the new members we get," said Eddie "St0rmTK421" Hermann, database programmer and one of four RF Generation administrators who joined with me recently for a bit of chit-chat. "But we're trying to encourage people to see the rest of the site. We have a great community and lots of other cool features many people don't even know about."

It's not just the cool features; RF Generation itself remains something of a hidden gem, flying largely under the radar even after four years of operation. Collectors are something of a rare breed to begin with, and despite the focus of the site, it's a demographic the operators haven't actively pursued. "We grow as people find and talk about us," site director David "TraderJake" Murnan explained. "We're not one to openly advertise. People tend to find us, rather than us finding them."