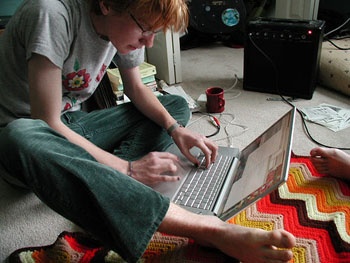 id Software CEO Todd Hollenshead stirred up some controversy at this year's QuakeCon when he suggested that PC manufacturers, despite paying lip service to the importance of intellectual property and copyright laws, are in reality happily taking advantage of the widespread perception that piracy is not only a victimless crime, but also one of the inherent benefits of owning a computer.

"I think that there's been this dirty little secret among hardware manufacturers, which is that the perception of free content - even if you're supposed to pay for it on PCs - is some sort of hidden benefit that you get when you buy a PC, like a right to download music for free or a right to download pirated movies and games," Hollenshead said in an interview with GamesIndustry. "I think that if you went in and could see what's going on in their minds, though they may never say that stuff and I'm not saying there's some conspiracy or something like that - but I think the thing is they realize that trading content, copyrighted or not, is an expected benefit of owning a computer."

Whatchoo talkin' 'bout, Todd? Are you in fact suggesting that major PC manufacturers may not actually be marching in lockstep with the videogame industry - not to mention the movie studios, television networks, music publishers and other content providers - in the struggle against consumer-level copyright violations? Surely, what gooses the PC industry is good for getting two ganders stoned at once, am I right? Which of course is just another way of saying, hey Todd, this ain't no great surprise.

Before I rose to fame and fortune as a respected videogame journalist, I spent some time - more time than I really like to think about - working in what's known in polite circles as the "retail electronics industry." All those years spent screwing the rubes providing knowledgeable assistance to valued customers gave me something of a unique insight into mainstream PC ownership, and the ugly truth is that as the market has grown, so has ignorance about and indifference toward some very basic aspects of copyright laws.

The simple fact is, a lot of people buy computers because it gives them access to "free" music and movies. The volume and variety of content available online is mind-boggling; everyone knows it, and, for better or worse, technology has advanced to the point where everyone can get it. People getting online for the first time don't question the legality of what they're downloading because, as Hollenshead said, there's an implicit assumption that when you buy the computer, you get everything that goes along with it. Everything.

You're kidding yourself if you think retailers don't take advantage of that. Ideals give way to pragmatism in a hurry when the reality of your situation is that whatever ends up in your wallet gets there by way of how much shit you can sell to people who may neither know nor care about the intricate details, or even the chunky generalities, of what they can and can't legally download.