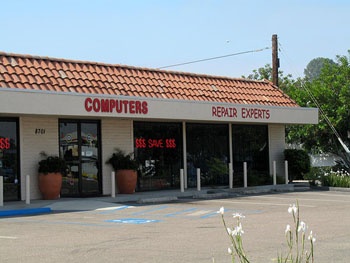 It'd be crazy to assume the industry as a whole isn't merrily rolling along with this state of affairs, happy to keep its blinders on as long as the sales charts look good. During my time in the retail mines I was forced to attend countless (and pointless) training sessions covering a tremendous range of subjects, yet despite computers being one of our most high-profile product lines, not one single minute out of all those hours was ever devoted to the issue of piracy. Obviously we were never told to promote illegal behavior in order to sell more hardware, but it sure as hell wasn't discouraged either, and the company's emphasis on MUSIC! and MOVIES! in its advertising was a far cry from subtle.

It would appear at first glance to be a short-sighted strategy. PC companies take advantage of the current market circumstances - that is, the ready availability of copyrighted content - to punch out a few more systems every month, but as piracy becomes more pandemic, some content providers will inevitably drop out of the game while others are forced to raise their prices, and that near-term advantage ultimately becomes a long-term liability as people come to realize that their money is better spent elsewhere, on more well-supported systems. The decision by EA Sports to cut development of several of its franchises for the PC is just one early, high-visibility manifestation of such a scenario, yet system builders seem to think they can walk that fine line between attracting customers with the promise of free loot while still keeping the hardware/software symbiosis viable.

Whether or not they can isn't terribly relevant; it's the videogame industry that's being victimized, and it's the videogame industry's job to do something about it. PC manufacturers will do what they perceive is best for themselves, and it's unreasonable to expect otherwise. Videogame publishers, on the other hand, would be well-advised to focus on the retail level in order to do something about the downloading they actually have a hope of preventing.

The industry's biggest problem isn't major piracy operations, at home or abroad, that it has no hope of doing anything about, nor is it PC makers who don't want to play ball; the real trouble lies with everyday people, average moms and dads turned loose into the online world without any thought given to the potential consequences of intellectual property theft. The good news is that this is also a demographic still within the industry's reach: Not through punitive measures, but through positive actions designed to educate people on the real damage done by piracy and stimulate their desire to pay for the games they play. Hollenshead is absolutely right, but how much that matters depends entirely on what the videogame industry is prepared to do about it.

Andy Chalk thought the 40-Year-Old Virgin was a particularly hilarious movie because of its shockingly realistic portrayal of retail electronics sales.