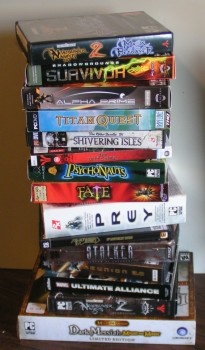 I somehow managed to miss hearing about this when it happened, but a couple of weeks ago, Stardock and Gas Powered Games decided to take the initiative in addressing some of the difficulties facing PC gamers today. The two companies, currently working together on the RTS/RPG hybrid Demigod, put together the "Gamers' Bill of Rights," a ten point manifesto that lays out a simple set of principles for smoothing the rough seas of an era in which the videogame industry appears to be growing increasingly hostile toward its own audience.

I'm all for the idea. Not that I think there's anything particularly wrong with the way the industry operates these days, but as a dyed-in-the-wool PC gamer I don't enjoy watching mainstream gaming consciousness shift toward consoles while at the same time the relationship between publishers and players grows increasingly contentious. I'm ready to embrace just about anything that can help reverse those trends.

But the Bill of Rights ain't one of those things. Despite looking good at first glance, most of the ideas contained within are hopelessly vague, a flaw that leaves it little more than a feel-good finger-wag at the usual suspects. It's a ten-point equivalent of stamping our feet and telling game publishers to "stop being so mean," and as a document intended to inspire real change, it barely qualifies as a good first step.

The first "right" demanded on behalf of gamers is "the right to return games that don't work with their computers for a full refund." Reasonable if you say it quickly, perhaps, but in reality it's incredibly problematic. Aside from the obvious concerns about people who buy, copy and return games, who determines when a game just "won't work?" Who eats the cost of the refund? And perhaps most importantly, in an industry as obsessed with anti-piracy efforts as this one, how are you ever going to convince major publishers to even consider the idea?

Similarly, the demand for a right to expect that games "won't install hidden drivers or other potentially harmful software without their express content" is an admirable concept that's easily hamstrung by arguments over what constitutes "potentially harmful." The simple answer is to avoid anything and everything that could be construed as such, but again, the industry's burgeoning love affair with increasingly-complex copy protection schemes makes it extremely unlikely to happen. And while it's easy to say that the interests of the industry aren't relevant - these are gamers' rights, after all - the fact is that without some level of cooperation, the Bill of Rights becomes about as meaningful as a dull internet petition.

It gets even hairier from there. The document suggests that gamers should have the right to "demand that games be released in a finished state," and also "to expect meaningful updates after a game's release." But what's finished, and what's meaningful? Patches? Downloadable content? Are companies allowed to charge for their post-release offerings? What about a game like Battlefield: Bad Company, in which EA planned to hold back certain material for gamers willing to pay extra for it? Does the game break the first demand or fulfill the second?

The suggestion that "Gamers shall have the right to expect that the minimum requirements for a game will mean that the game will adequately play on that computer" is even harder to nail down. The Random House Unabridged Dictionary defines "adequate" as, "as much or as good as necessary for some requirement or purpose." It would be safe to say, then, that this is not even close to "adequate" as a useful statement in relation to videogames. Minimum requirements are just that: The bare minimum necessary for a game to run. If you want "adequate" gameplay, get an "adequate" computer.