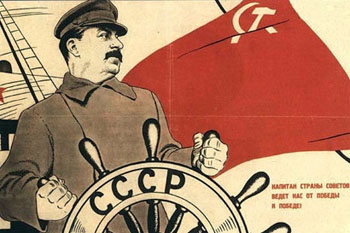 The Russians have invaded Georgia and rattled their sabers at other neighboring nations. They're sending a warship to unilaterally deal with Somali pirates. They've resumed bomber patrols along U.S. airspace, and even sent a pair of nuclear-capable Blackjacks on a goodwill mission to Venezuela. The great bear is yawning, stretching and casting an eye about, and he doesn't like what he sees.

And I say it's about god-damned time. Glasnost and perestroika is all well and good for the tree-hugging hippie "give peace a chance" types, but it's been nothing but bad news for those of us who like to play videogames.

When you get right down to it, most videogames are, in one form or another, about messing people up. Shooting them, bombing them, slitting them open and strangling them with their own intestines, whatever; the important thing is that at the end of the day, somebody gets taken out in a box. But in order to do that, you need somebody to do it to, and to be useful in a videogaming context that "somebody" has to fit a few prerequisites. They need to be available in sufficient numbers that you can spend hours (days, weeks, whatever turns your crank) inflicting the harm of your choice on them; they need to look dangerous as hell from a distance but be something close to completely incompetent in a real fight; and they need to be evil enough, or at least faceless enough, that you won't feel bad about blowing them away in countless numbers. Traditionally, that's left us with three major demographic targets for digital massacring: Nazis, Stormtroopers and Russians.

(Fun fact: The original, real Stormtroopers actually were Nazis, or at least German, which is close enough for the purposes of this discussion. The Sturmmann were specialized units of the Imperial German Army in the First World War, trained and equipped for rapid, high-impact assaults against enemy lines. In fact, many of the tactics and even equipment developed by and for the Sturmmann units were refined and redeployed to devastating effect in the early years of the World War Two. Which of course leads to the unfortunate but unavoidable conclusion that when you're killing Nazis, you're really killing Stormtroopers - and vice versa - with the net effect of reducing the variety of high-volume killable guys by a full third.)

You'll never feel bad about killing Nazis, but you're bound to get bored with it sooner or later. I don't know about you, but I've plugged a lot of them in my day, and not just normal run-of-the-mill Nazis: I've wasted a healthy share of Nazi zombies, Nazi mutants and Nazi cyborgs, too. Stormtroopers are even worse. At least with Nazis you get some variety; Stormtroopers are all just dudes in the same white armor who suffer from an alarmingly high incidence of macular degeneration. Even worse than boredom is the fact that the Nazis are gone and the Stormtroopers were never really here. That takes a lot of the edge off. There's no immediacy to the threat of something that doesn't actually exist, and without that visceral, knife-at-your-throat tension it's hard to really throw yourself into gut-stomping slaughter with any genuine enthusiasm. But what else is there?