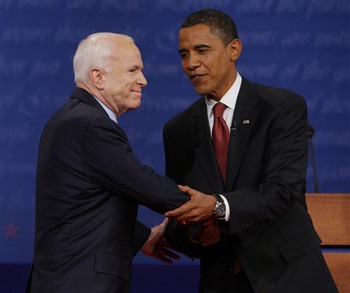 There are an awful lot of Xbox Live users out there, yes, but as a percentage of U.S. voters, their numbers are still very small, and while it's easy enough to throw your weight behind Obama while you're sitting on the couch waiting for the next round of Halo 3 to start, it's another matter entirely to get up off that couch and actually go vote. It may be an unfair stereotype, but I don't think it's entirely off-base: Election-day indifference is going to be far more prevalent among Xbox-playing Obama fans than among staunch Bible-belt Republicans who will actually cast ballots for their man on the big day.

Yet I do think gamers have a gut-level desire to be viewed as politically relevant, and Obama's online campaign has gone a long way toward fulfilling that dream. No matter what you think of him or his ads, there's no question that gamers are being very specifically targeted. But before we start feeling too self-satisfied about ourselves and our political heft, there are two points we need to keep very much in mind.

1. Obama's use of ads in videogames is not an endorsement of those games anymore than his use of ads on television is an endorsement of, say, Full House reruns. It's a means to an end, nothing more. Obama's strategists believe there are enough potential voters whose primary means of entertainment is Xbox Live that burning some cash on them is justified. Barack Obama, the world's most famous Pong player, is making no claims to gamer cred, and it's foolish to ascribe any to him simply because he's ahead of the curve in recognizing the value of alternative means of advertising.

2. This is what we wanted - to be accepted as legitimate, grown-up adults, with jobs and families and enough years under our belts to participate in the democratic process. We wanted our political clout to be recognized, and now it has, with all the baggage that entails. Don't like politicians hopping on your nuts by plastering their faces across Liberty City? Go play some Hello Kitty Island Adventure. We've been bitching for years about the average gamer being 33 years old; can we really complain now that someone is finally listening?

Whether or not Obama's in-game ads, or McCain's lack thereof, has any impact whatsoever on the outcome of the election will likely never be known. But what we can take from this is that finally, videogaming has grown up. Gamers are being seen as adults by the institutions of power, with all the benefits that entails: Being manipulated, lied to, used, abused and bombarded with mind-numbing negativity by people who neither know nor care about who we are or what we do beyond hopefully throwing a few votes their way. Congratulations, folks. Hope it's everything you wished for.

Andy Chalk is firmly convinced that democracy does not work, but he votes anyway.