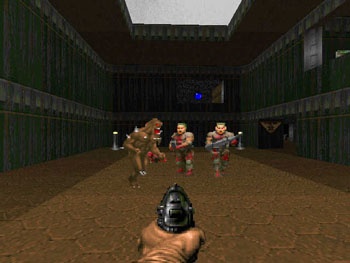 Christmas is coming, and with it comes the usual holiday-fueled frenzy of buying games for other people, particularly kids, be they yours or someone else's. Kids tend to be somewhat more dependent upon the kindness of others than adults, and people are never more inclined to be both generous and completely lacking in discretion with their generosity than Christmas.

Which makes it a great time to clear up a few areas of confusion regarding everyone's favorite North American videogame advisory agency, the Entertainment Software Rating Board. The ESRB has been around for almost 15 years now, and its bold, monochromatic warning labels are familiar to anyone who's spent more than five minutes in their local EB or GameStop. Yet what the ESRB actually is, how it works, and why, despite all the grief it takes from both gamers and non-gamers, the group is very much a force for good, remains something of a mystery for many people.

A few simple questions, then:

Is it illegal to sell Mature-rated videogames to people under 17? No. This is one of the most common misconceptions regarding videogame ratings in the United States, that retailers are legally bound to enforce game ratings. They aren't. The ESRB was established by the videogame industry as an independent watchdog, working with both publishers and retailers to establish and enforce a universal rating system for games in North America, and as such, compliance is entirely voluntary - although like so many "voluntary" things in this day and age, it's all but mandatory for any game that wants to be sold off store shelves, as opposed to, say, out of the developer's basement.

But if it's not mandatory, why do publishers go along with it? In the early '90s, the industry was facing something of a political crisis. The 1993 release of Doom, in particular, led to the perception of videogames as the mind-warping love-spawn of Satan and Hitler, even as they were growing increasingly popular. Naturally, there was a politically-expedient desire among many politicians to "do something" about them; what, or even why, was difficult to nail down, but these are politicians we're talking about.

At any rate, the writing was on the wall. Collectively, the game industry realized that this populist stampede needed to be headed off at the pass, so it took steps to do just that, establishing (via a more drawn out process than we're going to get into here) the ESRB. It was a win all around: The game industry made Congress happy while keeping it from rummaging through the dirty laundry, and Congress got to look like it was kicking some ass on the videogame front without finding itself balls-deep in a Constitutional quagmire.

A decade and a half later, publishers continue to play ball for a reason far more compelling than mere legislation: Money. Major retailers in the U.S. won't touch unrated games, or even Adult Only games for that matter (hence the occasional spectacle of a publisher begging, pleading and cutting to get that crucial M) and if your game isn't on the shelf at Wal-Mart and Best Buy, it ain't gonna sell. Meanwhile, in the aftermath of the Hot Coffee debacle, which threatened to bring a whole new political firestorm down on the industry, the ESRB got tough: Publishers who jerk the board around regarding a game's content now face fines of up to $1 million, and repeat offenders could find their games being refused a rating, which as mentioned is a virtual kiss of death for any game about to hit the market.

Monkey Play, Monkey Do Michael A. Mohammed 24 Comments
Comments on