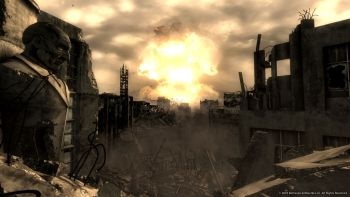 A funny thing happened on the way to elite PC gamer smugness.

Being a hardcore PC gamer is more than just playing games; it's a responsibility. It's a code of conduct, really, built around a central tenet of heaping scorn and derision upon all aspects of console gaming at every opportunity. Keeping the button-mashers in their place is a tough, dirty job, but as the standard-bearers of a higher form of gaming, it's one we embrace whole-heartedly.

Everything is fair game, from their sideways hats to their laughably-imprecise controllers. The multiplayer gaming they get so excited about is a perfect example of console mediocrity. We have the entire God-damned internet at our fingertips, and what have they got? Xbox Live? What is that anyway, Compuserve for the technically disinclined? And let's not forget Achievements, those virtual Boy Scout badges for people who can't put thumb to stick without expecting points for it: Ooh, look at me, I finished the game 27 times in less than a week! I get an Achievement!

Achievements. Ha! Brain candy for the dimwitted, I say. And yet... I have a confession to make.

As a fan of both Bethesda and the Fallout franchise, there was only one thing on my mind when I brought home Fallout 3: Playing the game. The last thing I was interested in was wasting time on some half-assed Xbox-style online nonsense from Microsoft. Games for Windows? I had my game, I had Windows and I had absolutely zero interest in whatever online fiddle-faddle it was that had Xbox 360 owners in such a giggling tizzy. Thus, it wasn't until I had around 120 hours sunk into the game - I really like Fallout 3 - that I decided to dig into this "Live" business and see what it was all about.

I was caught off-guard at first by the fact that everything was Xbox-centric. Despite playing on a PC, I was given an Xbox Live login and an Xbox Live Gamerscore and when I logged into my profile, I ended up at Xbox.com. It was confusing, but I persevered - no console nonsense is going to outwit me - and before long I had an account, with my reputation, my zone and Fallout 3, my single, solitary Live game. It wasn't much, but once my many achievements were recognized as Achievements, I could deliver the virtual flip-off to everyone who bought the 360 or PS3 version of the game, laugh about the release of the PC-exclusive content editor and the deluge of free new material that's sure to follow, and be on my way.

But for some reason, despite having accomplished an awful lot of stuff (the inevitable by-product of sinking the equivalent of five uninterrupted, no-sleep days into a game) my account showed no Achievements. I refreshed the screen, to no avail; I exited the game and restarted, and still there was no change. I rebooted, then waited an hour or two for the account changes to take effect, during which time I looked up a list of Fallout 3 Achievements and confirmed that I had unquestionably completed some - probably most - of them.