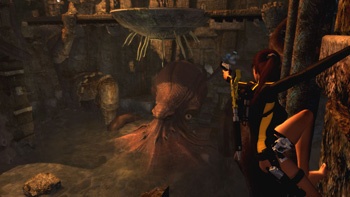 Things aren't looking too good at Eidos. The U.K.-based publisher was recently forced to lower its revenue forecasts for the year, resulting in a nosedive in the company's share value of almost 30 percent. The situation at Eidos-owned developer Crystal Dynamics is just as grim: That same day, the studio announced it would be laying off 30 employees, which Kotaku reported was being done to "eliminate redundancies and give the studio tighter focus moving forward."

The reason for all this bad news? Tomb Raider: Underworld, the latest entry in the long-running series of archaeological action games featuring Lara Croft. With worldwide sales of 1.5 million units the game didn't bomb by any stretch, but still fell well short of the 2 million unit sales initially projected by Eidos. As a result, revenues for the year are now expected to come in at around $240-270 million, rather than the $270-300 million the company had expected.

Layoffs, revenue shortfalls, tumbling share value - it's a bad situation all around, and Eidos' initial response is not especially heartening: The company is considering, among other things, revisions to the series to make it more "female-friendly." Specifics as to what Eidos believes will constitute an increase in chick cachet are short at this point, but Chief Financial Officer Robert Brent suggested that nothing is sacrosanct. "We need to look at everything as we develop the next game," he said in a recent Times article. "Look at how Batman changed successfully, from the rather sad character of the Michael Keaton era to the noir style of The Dark Knight."

It's an interesting point, but one that I think overestimates the value of the Tomb Raider property. Batman is unparalleled in the world of superheroes, and even after the abortion that was Batman & Robin, movie-goers still wanted to see the franchise return to form. But does that sort of consumer-level demand for a rejuvenated Tomb Raider game really exist? Brent's premise relies on the idea that large numbers of people want what he's offering, as long as it's done properly. But is it reasonable to assume that, first, this potential audience is really out there, and second, that some ill-defined appeal to female gamers is going to bring them running en masse to Eidos' doorstep?

Retreating to familiar territory isn't an uncommon response to tough times, and God knows Eidos and parent company SCi have had a rough go of it lately. But Tomb Raider, despite its long history and Eidos' most fervent wishes, just does not enjoy a reputation as one of gaming's strongest and most reliable franchises, and it apparently hasn't occurred to anyone at Eidos that it may simply be unable to generate the numbers it wants, regardless of what's done to it. You don't sell 1.5 million copies of a game everyone hates, but after eight entries in a series that's been all over the map in terms of quality and commercial success, franchise fatigue is almost inevitable.

And not everyone thinks that targeting girl gamers is the right response to Lara's waning popularity. "I don't know where [the female-friendly makeover] came from," former Crystal Dynamics Creative Director Eric Lindstrom wrote on the Tomb Raider forums. "I feel that even though Lara has attributes that appeal to males, the game doesn't pander to a male audience. Look at all the other games out there with female heroes, and look at their bustlines and what they are (barely) wearing. My Lead Designer Harley (a woman) agrees that Tomb Raider is not a gender specific game, and research shows that it appeals to female gamers very well."