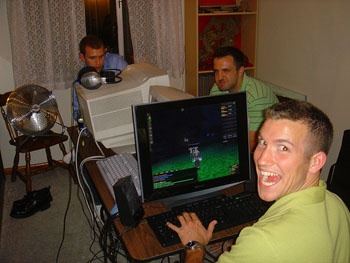 I began to think that I'd been had, that all this noise about a dating site for gamers was really nothing more than an attempt to sucker in the desperately lonely (and sex-hungry) hordes who clog the tubes of the internet. I felt cheap and used... Well, no, I didn't. Not really. In fact, I wasn't even all that terribly surprised or disappointed. Discovering that a dating site for gamers was a scam was about as shocking as my 200th viewing of goatse: I was way too hardened to the wicked ways of the internet to even bat an eye.

There are valid social sites dedicated to gaming, of course. Vigster, a site that entered open beta in June 2008, is one such example. Combining a MySpace-like social network with a "videogame IMDB" featuring over 30,000 titles, Vigster offers forums, user reviews, a Yahoo! Answers-style question-and-answer section, a "virtual game shelf" where you can display the titles in your collection for the world to see and more. It's a thorough and full-featured site, if a bit rough around the edges ( it is beta, after all) and it also appears to be largely unused. Going back to November 26, the Vigster forums - that most basic element of online communities - have accumulated 30 topics with a total of 70 posts. The game database is hefty but very few people seem to be using it, and day-to-day activity appears to be minimal.

But as I thought about it, I realized the whole thing was a wasted effort anyway. Gamers are already social; we have places to congregate, to talk amongst ourselves, to get to know one another and, not-always-overblown concerns about stalkers, slashers and other creeps aside, to arrange meetings with one another in meatspace. Conventional social networks like Facebook incorporate casual gaming as a major part of the user experience, while more dedicated gamers can get their fix with like-minded fellows at places like, to use a completely random example, The Escapist. Sites like these offer forums, chat rooms and user options through which people can show off their picture, their Gamercard, links to personal web sites and more, all in a vast, interconnected and perpetually growing web of online friends. Real gaming communities of all shapes and sizes have been around for ages: Dating sites and social networks aimed at "gamers" - which is a ridiculously wide-ranging demographic to begin with - are redundant.

It belies the old stereotype of the solitary gamer ensconced in his parents' basement, bathed in the iridescent glow of a monitor and a vague whiff of nacho cheese, but gamers are social creatures. Always have been. I don't have much hope for efforts to attract gamers to online social scenes, because we're already there. We've been doing this for years - meeting and greeting, finding friends, falling in love, getting it on, getting married, making little mini-Master Chiefs - all without the benefit of Game 4-A-Date. It's who we are. It's what we do.

Featured Articles: The Time I Was a Social Outcast thatsthespirit 37 Comments
Comments on