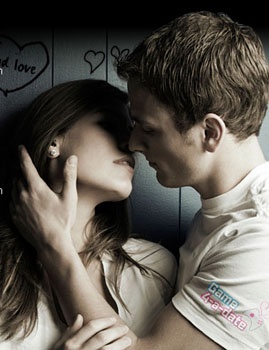 The days since I've known the loving touch of a woman have grown long and cold. I can't fathom why. Is it my taste in music, which is best described as firmly rooted in rock of the classic sort? Maybe my wardrobe is the problem, light as it is on the Enzo Angiolini and heavy on the Iron Maiden World Tour '97. Perhaps it's my Severus Snape haircut, which doesn't seem to flatter me in quite the same way it does Alan Rickman.

Or could it be my hobby of choice? Let's face it, everyone plays videogames, but not everyone is a dyed-in-the-wool gamer. Particularly not people my age. And as it turns out, chicks today are about as impressed with my cogent insights into the Half-Life 2 plot as they were 20 years ago with my ability to rack up six-digit scores in Bosconian. Let's just say I didn't see a lot of action in high school.

But has all that changed? Gaming is suddenly a major mainstream market, no longer the exclusive stomping ground of weirdos and geeks, and you know what that means: Pandering and exploitation can't be far off! Thus it was with some trepidation that I approached Game 4-A-Date, an online dating site for people who apparently are just as passionate about games as I am.

As I filled out my profile, I noticed with some suspicion that I was not once queried about my gaming habits: Not what I liked or disliked, not my platform of preference, not even something as basic as my favorite game. Even more disconcerting was the discovery, once I had finished filling in the paltry information non-paying members have access to, that I also couldn't search through any prospective matches based on game-related criteria.

How am I supposed to meet that special someone if I don't know where she stands on the question of DRM? Could I really take seriously any woman who believes that the release of Halo was a pioneering moment in FPS history? And how - how - am I supposed to have a conversation with someone who thinks a keyboard and mouse is "too complicated?" Yet this is what I'm faced with: A dating site for gamers that never actually mentions games.

Deciding to probe deeper, I started scanning through candidates, accepting and rejecting potentials with my keen eye for the superficial. I read the brief bios that are attached to the hopeful photos. Age, height, race, religion, hobbies, likes and dislikes: Before long, they start to blur and melt into one another, a hazy melange of banality put together by dozens of women who had read hundreds of similar messages before they screwed up the courage to try it for themselves. And among them all, not one - not a single person - even mentioned videogaming as an interest.

I don't give a shit if you're a smoker or a social drinker! What's your Gamerscore?

Featured Articles: The Time I Was a Social Outcast thatsthespirit 37 Comments