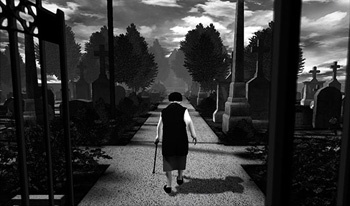 Petri Purho's Nordic Game Jam 2009 experiment Four Minutes and 33 Seconds of Uniqueness has elicited some interesting and rather strong reactions among gamers who have found themselves mystified by his creation. Some seem compelled to continue "playing" it over and over in a desperate bid to "win," while others, including The Escapist's own Julianne Greer, have asserted that it's not a game at all but merely an application, and a broken one at that. Regardless of what it is, Purho appears to have accomplished what he set out to do: Push boundaries and get people talking about what a game can actually be.

One of the stickiest bits in the debate over whether games are art has always been the requisite need for a hard definition of art, a moving target if ever there was one. But Purho approaches it from the opposite direction, seeking instead "an exploration [of] what actually defines a game." And as you might expect when the question of videogames as art is turned around on itself, the line between the two becomes even more blurred and the resulting games are far more abstract than conventional releases.

Four Minutes and 33 Seconds of Uniqueness is far from the first game to muddy the waters of videogame artistry. Belgium-based developer Tale of Tales creates games specifically to explore that side of the medium, first coming to prominence in 2005 with The Endless Forest, a "social screensaver" in which people become disturbingly anthropomorphic deer roaming around a great, peaceful woodland setting. There is no violence, no goals to accomplish and no scoring, and communication between players takes place not by way of voice or text chat but through body language and animal grunts.

The studio took things even further last year with The Graveyard, a single-player story of an elderly woman's visit to a cemetery. Although under the player's control, there's only one place for the woman to go: A bench in front of a small mausoleum. She'll take a seat and remain there, contemplating her surroundings and perhaps the nature of existence while an odd little song plays, until the player decides to it's time to leave. She then walks out the way she came in, through the cemetery gates, and the game ends. The full version of the game throws a curve by introducing the very slim possibility that the woman will die during her visit.

This is a game?

The folks at the Independent Games Festival think so. The Graveyard has been nominated for the Innovation Awards at the upcoming 2009 IGF, taking place in March. "It's more like an explorable painting than an actual game," the IGF website says. "An experiment with real-time poetry, with storytelling without words." Also nominated in the category is a two-player examination of "consciousness and isolation" called Between, created by Jason Rohrer - and if that name is familiar to you, it's likely as the creator of Passage.

One of the better-known examples of interactive art, Passage is entirely open-ended: Players can wander aimlessly, explore, rack up points, even engage in a romantic sub-plot of sorts, none of which has any meaning because it all leads to the same inevitable conclusion: Your death. It is, when approached with the proper mindset, a remarkably powerful and poignant experience. And unlike Four Minutes, the inclusion of actual game mechanics, primitive though they may be, makes it less deniable as a game. But with a predetermined ending and the apparent irrelevance of your actions, the point is not to entertain but rather to provoke thought.