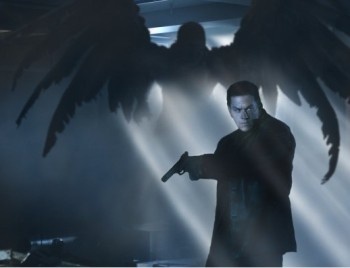 I finally got around to watching the Max Payne movie this weekend, something I've been putting off because as a fan of the games it was inevitable that the translation to the big screen would be a letdown. Sure enough, my disappointment did not disappoint. I came away unsatisfied, vaguely confused and happy above all else that I didn't fork over twenty bucks plus gas and corn to see this thing in the theater.

Not that it was the unspeakable abortion some people had made it out to be. Probably the most succinct and accurate summation came from a friend who, after learning I'd rented it, said to me, "You know it's a crappy movie, right?" And he was bang on the money: It was indeed crappy. Not awful, not horrible, not hilariously bad. Just "crappy," that generic sort of mediocrity that's the hallmark of all but a handful of movies released these days.

"Disjointed" is the word that kept popping into my mind as I watched. It was less a movie than a pastiche of brief but stylish video clips chock full of slow-motion gunfire, moody lighting and intense close-ups but utterly devoid of anything more substantial. Imagine a movie trailer cut together for maximum impact that somehow stretched on for an hour and a half: The characters are ill-defined, their motivations are unfathomable and dialog veers from cryptic to nonsensical with all the trying-too-hard gravitas of a first-year film school project. The most interesting part of the whole experience is the fact that I went into it prepared to excoriate Mila Kunis for destroying the role of Mona Sax and came away amazed that she hadn't fared much worse than anyone else involved in the thing.

At the time of its release, Max Payne represented our best chance ever at getting a videogame movie that finally broke the shitmold. The game featured great characters from top to bottom, a story as good as that of any Schwarzenegger flick you'd care to name and tons of guns-blazing, bodies-flying, stuff-blowing-up action. It all seemed as simple as sitting the director and the screenwriter in front of a PC and saying, "See that? Do that!" And once again, what should've been simple turned out to be anything but.

Why is it so goddamn hard to make a good videogame movie?

They're not all great steaming blobs of rank putrescence, of course. Travesties like Wing Commander and A Dungeon Siege Tale get all the attention but there's a handful of game-based films, slowly growing, that have managed to claw their way out of the cesspool and into the ranks of the nearly-not-bad. Doom was idiotic and bore little resemblance to the game besides the name on the box but was goofy fun nonetheless, while Hitman was a passable action film and even Max Payne managed to avoid serious train wreck territory; not a ringing accolade, perhaps, but really no worse than what you'd say about most of the schlock Hollywood throws up on the silver screen these days. Yet in spite of the great wealth of subject matter available, there's not been a single movie based on a videogame that broke out of the gate, made a good impression and rolled on to serious commercial and critical success.