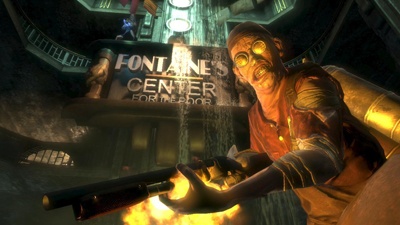 I've been struggling with a certain amount of self-doubt lately. There was a time when didn't suffer from such wishy-washy vacillations, when I was as certain of my rightness about all things gaming as I was that the goddamn kids should stay off my goddamn lawn. The line that divided good games from special ones was clearly drawn and glowed in the dark. You couldn't possibly miss it. But not only does it feel like nearly everyone does miss it, in most cases they can't even be bothered to look for it. The vast majority of gamers these days seem to neither know nor care whether or not a man is entitled to the sweat of his brow; they're too busy drooling over the glitzy visuals, multiplayer action and slick marketing campaign.

Half-Life is a huge franchise, built around a faceless, nameless generic main character who never speaks. The most amazing thing about the story is the way it's so far managed to camouflage the fact that there really is no story at all. The gripping drama promised in Gears of War 2 fell way short of the mark, yet it went on to sell about half a bazillion copies. The great unwashed mass of gamers is apparently quite happy to just run around mindlessly blowing the crap out of everything they see. "Coherent narrative" might as well be Guilty Spark's less famous little brother.

In that light, it only makes sense for developers to question why they should bother coming up with a cogent and engrossing story when the vast majority of gamers are perfectly satisfied with tissue-thin rationales for blowing stuff up. Hey, I'll admit that contemplating the fallout of a failed objectivist utopia doesn't have quite the same zing as blasting some poor schmuck in the beanbag with a rivet gun. And I'll further 'fess up to the fact that when I'm diving down a stairwell, akimbo MAC-10s blazing away at the gang of mob stooges arrayed before me, I'm not thinking about the lengths a man will go to in the search for love.

But even so, isn't the old saw about steak once a week and crap every day just a tiny bit sad? Shouldn't we feel a slight twinge of regret when Take-Two starts making noise about a multiplayer mode shoehorned into a Ken Levine-less BioShock 2, while Rockstar gives Max Payne a new voice, a fat ass and a dirty wife-beater? The essence of these games is not in the easily-duplicated action but in the setting, the characters and the story that unfolds as we make our way from beginning to end. Without that, they're reduced to lifeless, empty shells, little more than pale shadows of their former glory.

Andy Chalk has an office chair just like the ones used in the BioShock turrets.

Playing for the Story Logan Westbrook 120 Comments
Comments on