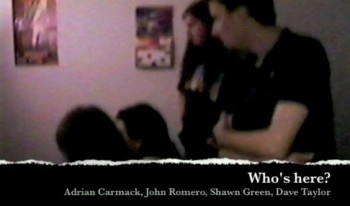 "Watching people freak out about letting the baby beakiez die is, of course, enormously entertaining. They will merrily run out of bubbles and thus lose the game in a desperate attempt to save the suffocating beakiez. It's so compelling to some players that we've had to emphasize the importance of getting fruit and de-emphasize the attention on the beakiez," Taylor said. "The trick, of course, is to resist your urges and focus on the fruit and only go for beakiez once you've mastered that."

Once you've learned to live with your complicity in the Beakiez bloodbath (and believe me, it's tough), beating the game's levels gets a whole lot easier. Beating the rest of the world, on the other hand, is a different matter. Croaking beakiez notwithstanding, that's the game's big seller: Every time it starts, it connects to an external server and grabs an updated list of scores and rankings for the top 100 Beakiez players in the world. Taylor says the competition is fierce.

"The game is completely cute, but it's utterly hardcore and competitive," he said. "Definitely a wolf in sheep's clothing. It's much more competitive than Abuse and you have to be lots more savvy about physics than required by Doom and Quake. There are a lot of different strategies to get the highest score. They include bonuses for conserving bubbles, time completion bonus, a bonus for saving beakiez, for releasing multiple fruit at once, for connecting groups of bubbles, for dropping one group into another, for high-speed mid-air bubble collisions (particularly tricky and rewarding), for unbroken popping sequences, and more."

"It's not for the faint of heart," he added. "We have some bad-asses playing."

Ironically, that ability to compete with the rest of the world, which provides the game with so much of its appeal, may also be its Achilles heel. Online game portals like Big Fish and GameHouse say they like Beakiez but won't publish it because of policies against external server connections. Taylor thinks it would be "perfect for WiiWare," but Nintendo refuses to give opGames a developer license because the five-man team doesn't have a physical office; they all work remotely from locations in California, Colorado, Oklahoma and even Australia.

Even Steam, that great bastion of indie studio love, turned them down without explanation. Taylor said that rejection was a "crushing blow," because Steam is the only portal they know of that doesn't have a problem with external server connections. What it does have a problem with, apparently, are "bubble pop" games.

"I tried a few friends at Valve to see if it could be reconsidered, including a couple emails to Gabe. No response," he said. "I asked a friend familiar with Steam, and he said they don't like 'bubble pop' games. Might explain the scarcity of them on Steam, but I could find no public policy against them. We've tried to differentiate it from the crowd by making it hardcore competitive, which I think is part of what made Puzzle Bobble a classic in the arcade and which I think would make for a personality match with Steam players, but that doesn't seem to have persuaded."