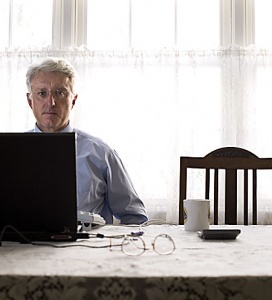 Jack Thompson. As the Red Skull did to Captain America, so Thompson fills gamers everywhere with a teeth-clenching cocktail of rage, vitriol and confused frustration over our inability to understand what exactly is wrong with this guy and why he has to keep acting like such a jerk. He inspires extreme reactions in virtually everyone he interacts with; he's gone so far, even some of his erstwhile allies are beginning to distance themselves from his circus. But in light of a recent report that the Florida Bar Association has suggested he undergo a psychological evaluation, one question hangs in the air, just begging to be asked: Is Jack Thompson really crazy?

A self-described Christian conservative and Republican, Thompson's beginnings were innocuous enough. Born in 1951, he grew up in Cleveland, Ohio, attended Denison University, went to law school at Vanderbilt University where he met his wife, then moved to Florida in 1976. He joined the Key Biscayne Presbyterian Church where he became a born-again Christian, got involved in local politics, and if that was the end of the story he'd be well on his way to a very normal, moderately successful and otherwise wholly unremarkable life.

Alas, it was not to be. As far back as 1987, Thompson was demonstrating the combination of pitbull tenacity and outrageous behavior that would become his hallmark. As part of a dispute with Florida radio personality Neil Rogers, Thompson spent eight months recording every broadcast Rogers made, eventually documenting 40,000 individual on-air mentions of his name. 40,000. Based on a previous agreement with the radio station, he claimed that saying Jack Thompson 40,000 times was worth $200 million and sued for that amount. The courts disagreed, the suit was dismissed and Rogers remained on the air.

The zaniness continued. In 1988, Thompson stood for election as Dade County State Prosecutor against the incumbent Janet Reno, who had recently frustrated him with her refusal to prosecute Rogers for his on-air swipes at him. At a campaign event, he presented Reno with a letter asking her to indicate, publicly, whether she was homosexual, bisexual or heterosexual. In response, according to Thompson, Reno put her hand on his shoulder and replied, "I'm only interested in virile men. That's why I'm not interested in you." Thompson filed a police report accusing her of battery for touching him. A special prosecutor was appointed to investigate the charge, which was quickly dismissed as a "political ploy," and Reno went on to crush Thompson at the polls, winning 69 percent of the vote.

Ever the gracious loser, in 1990 Thompson accused the Switchboard of Miami, a social service group that held Reno as a board member, of placing "homosexual-education tapes" in public schools. This served as the impetus for Thompson's first court-ordered psychological examination: He passed and repeated his allegations of Reno's lesbianism when she was appointed U.S. Attorney General; he later accused her of suffering from various mental disorders as a result of side effects of the medication she was taking for Parkinson's Disease.

That same year, Thompson achieved national prominence as a result of his crusade against the 2 Live Crew album, As Nasty As They Wanna Be, which, although unremarkable by current standards, pushed hard against the limits of what were considered acceptable standards of decency for its time. In affiliation with the American Family Association, Thompson contacted Florida Governor Bob Martinez and State Attorney Janet Reno, attempting to convince them to investigate whether the album violated Florida's obscenity laws. The state prosecutor declined, but Thompson was able to move local officials to action, blocking sales of the album in various locales.

Considering the widespread panic over moral decency and music lyrics during this time, Thompson's actions appear almost reasonable. But in this case, the weirdness begins not with his madness, but his method: In his correspondence, Thompson would often include a photocopy of his driver's license with a picture of Batman pasted over his photo. "I have sent my opponents pictures of Batman to remind them I'm playing the role of Batman," he said. "Just like Bruce Wayne helped the police in the movie, I have had to assist the sheriff of Broward County."

The hits keep on coming. In 1992, facing disbarment over allegations that he lied in accusations against fellow lawyer Stuart Grossman, Thompson admitted violating Bar rules of professional conduct and agreed to pay a $3,000 fine and receive a public reprimand. In spite of this admission, however, he asked a Florida judge later that same year to declare the Bar Association unconstitutional, claiming it was engaged in a vendetta against him because its pro-gay, liberal agenda conflicted with his religious beliefs.

It was not until 1997 that Thompson would turn his attention to videogames. On December 1 of that year, 14-year-old Michael Carneal shot and killed three schoolmates at Heath High School in West Paducah, Kentucky, and wounded five more. Investigators determined that Carneal was a gamer, regularly playing Doom, Quake, Redneck Rampage, Mechwarrior and others, and that he had accessed online pornography. In 1999, Thompson represented the parents of the three murdered children in a $33 million lawsuit against two porn websites, creators of the 1995 movie The Basketball Diaries and several game companies. Although the suit was dismissed in 2001, a decision which was upheld on appeal, Thompson had found his new bugbear.

Were it not for his uncanny ability to find audiences gullible, naÃ¯ve and uninformed enough to buy into his fiery rhetoric, Thompson would likely be viewed as little more than a real-life incarnation of the famous Wile E. Coyote: His prey remains elusive, and his methods of pursuit grow more garishly bizarre, but the absolute single-mindedness of his cause is utterly unwavering. Much like the ambition of Commodus, however, such all-consuming determination and drive can very quickly be turned to zealotry.

The good news for gamers is in spite of the best efforts of zealots throughout recent history, we can still legally drink alcohol, play Dungeons & Dragons and even listen to 2 Live Crew. Jack Thompson's combination of paranoia, outlandish behavior and ad hominem attacks against his opponents certainly lend credence to the possibility that the man is dealing with some rather deep-seated psychological issues. He is inflexible and intractable and possessed of what appears to be a divinely-inspired belief in the rightness of his cause. And while I'd certainly be happy to learn that all those things add up to a sum total of crazy, finally and absolutely condemning Thompson to the irrelevance he so richly deserves, I'm not holding my breath. I expect we will have to satisfy ourselves with other invectives to describe the man, while we wait patiently for the passage of time to consign him to a historical footnote.

Andy Chalk is a freelance contributor to The Escapist Daily.