If you want to try out Heroes of the Storm and you're coming from League of Legends, DOTA 2, or another Moba game, then here nine things you need to know about how Heroes differs from these other games.

Heroes has seven different maps, or battlegrounds, to fight on, and more will be coming in the future. These maps don't just differ cosmetically; they also have different sizes, layouts, and most importantly, they each have a unique game-changing objective. The two teams must compete to complete the objective, and the team that does so gains a huge advantage.

While killing the enemy team and pushing their towers remains a big part of the game, you could actually see a team that has half the kills of the other team make a comeback and win the game through strong teamwork and coordination in capturing the objective. For example, on the map Dragon Shire, two shrines located on opposite ends of the map activate every few minutes. Once one team controls both shrines, one player on that team can transform temporarily into the Dragon Knight, which makes them a wrecking ball against enemy forts.

If at least one teammate is up to roughly half a screen away when an enemy minion dies, your entire team gets XP for the kill. This means that as long as you have at least one player in each lane to soak up XP, other players could be freed up to roam, gank, or go after mercenary camps without falling behind. 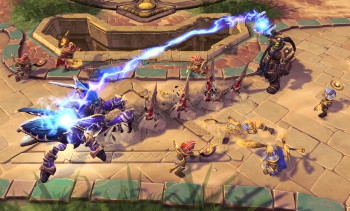 Instead, your hero customization comes in the form of talents. Every few levels, you get to select one of a few different talents which shape the way you play your character, much the same way a build would in an RPG. By level 20, two identical heroes may have different play styles based on the talent choices that the players made throughout the game. Oftentimes, these talent choices may help you complement a strength in your team's composition, or make up for a weakness.

For instance, if your team lacks a dedicated healer, you may grab a talent that grants you life steal to make up for the fact that you wont be healed by someone else. Or, if you're a healer and have another healer on the team, you may pick talents that specialize you more toward crowd-control or debuffing.

Every map in Heroes has mercenary camps, of which there are three different types. Once you defeat a mercenary camp, you can get the defeated mercs to fight for you by standing next to them for a few seconds. These mercs will then push down a lane toward the enemy.

What's interesting to note is that the mercs don't fight for those who defeat them, but those who stand next to them after defeating them. So a tricky play may involve waiting for your enemy to defeat a challenging merc camp, then swooping in to either gank them or scare them off and take the camp for yourself.