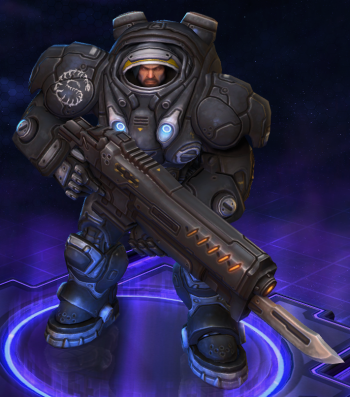 Raynor is a ranged assassin from the StarCraft universe and is one of the first characters I learned to play. While Raynor's main role is to deal damage to enemy players, his kit makes him a very versatile character, and he is well suited to both team fights and pushing lanes. Let's take a look at his kit.

Penetrating Round (Q) is a short-range skillshot that pierces multiple targets and knocks them back. The piercing element of this ability is especially helpful in the early laning phase of the game as it allows Raynor to efficiently clear minion waves. The knock-back component, however, is a bit of a double-edged sword. It can be really helpful for kiting enemies and keeping them at a safe distance, but when chasing down fleeing targets, using it can actually push them out of Raynor's range and allow them to escape with low health. In those situations, it is best used as a finisher.

Inspire (W) gives Raynor - and to a lesser extent, his allies - a fairly significant attack speed boost. Since this skill applies to minions and mercenaries as well as allied heroes, it can be a strong tool for pushing down lanes and give your team an edge in fights.

Most assassin-type characters are very squishy and will die very fast to focus fire, but Raynor fares a bit better than most thanks to his third ability: Adrenaline Rush. This passive ability heals Raynor for a large portion of his health whenever it drops too low, thus enabling him to stay in the fight longer than a lot of other assassins. However, it does have a very long cooldown, so it's important to get out of danger once it triggers. 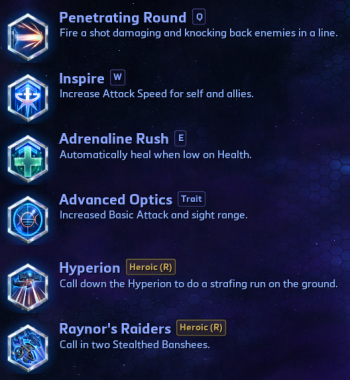 Advanced Optics, Raynor's trait, gives him the longest attack range of any ranged assassin in the game and more vision than any other character. It's a simple trait that you probably won't ever think about, which makes it ideal for newer players who are still learning the ins and outs of Heroes.

Like all other heroes, Raynor has two heroic abilities to choose from: Hyperion or Raynor's Raiders. Both are very strong, and the choice of which one to use really depends on your build, the map you're on, and your overall playstyle.

The Hyperion is a long range AoE skillshot that randomly damages enemies in a straight line. Thanks to its increased damage to enemy structures, this skill is very good for pushing lanes and siege damage. Its AoE component also makes it useful on maps such as Sky Temple, where objective fights are centered around small areas, as it can be used to effectively zone back the enemy team.

Raynor's Raiders is a targeted ability that summons two banshees to attack an enemy. This skill is great for picking off high priority targets such as support characters or other assassins, because it does massive damage and can be re-targeted. These are both strong heroics, but for new players I'd recommend going with Raynor's Raiders, simply because it fits better with Raynor's role of an assassin, and as a new player it is probably best to focus on a single role instead of trying to build a hybrid character right off the bat.

Raynor's talents allow for some variation in playstyle, including an auto-attack build, a build focused around improving his Q, and even a build that turns him into a quasi-specialist by focusing on quickly gaining and buffing mercenaries. It all depends on what you're trying to do, but for new players, I think a build focused around improving his auto-attacks will be the easiest to learn. I won't give a full build here, but there are a few talents that I think are best suited to new players.

The level 1 talent Give Me More greatly increases the amount of health gained from Raynor's E ability, which will increase his survivability and in turn his damage since, of course, a dead assassin deals no damage.

At level 7, I'd advise picking up Revolution Overdrive, which adds a speed boost to Raynor's W. This can be used both offensively for chasing down fleeing targets and defensively to help Raynor escape pursuing enemies.

Level 20 is where things get a bit tricky, as you have several good options to choose from. You can either choose to buff your heroic ability, take Nexus Frenzy which further increases Raynor's auto-attack range and speed, or you can go with Bolt of the Storm, which is a short-range teleport. All of these can be pretty good options depending on the situation, but due to the fact that Raynor has no escapes, I would recommend choosing Bolt of the Storm in most cases.