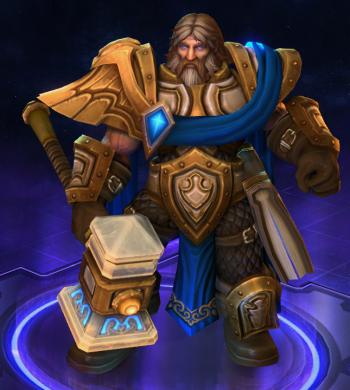 Uther the Lightbringer is a melee support from the Warcraft universe who brings strong healing and crowd control to the table. As a support, his main role is to keep his allies alive and set up kills via his stuns. However, despite the fact that he is wearing plate mail and carrying a giant hammer, he is lacking when it comes to damage and can be kind of squishy, so he is not the best solo laner. You should try to be with at least one other teammate whenever possible.

Uther's Holy Light (Q) is a single-target heal that restores a good amount of health, but comes with a fairly short range, a long cooldown, and a hefty mana cost in the early game. Despite those drawbacks, this is your bread and butter healing spell and is invaluable for keeping you or your allies in the fight.

Holy Radiance (W) is a straight line skillshot that heals any allies in its path for a decent amount and does a small amount of damage to enemies. Since it can heal multiple allies at once, this skill is best used when your allies are clumped up together. It can be used offensively to help push lanes or finish off a fleeing opponent, but due to its low damage and fairly long cooldown, it's generally best to use it as a heal.

One of Uther's more offensive offensive abilities is Hammer of Justice, which stuns a single target for a short amount of time and does a small amount of damage. Like with Muradin's Stormbolt, the stun is more important than the damage, as it can be used to set up kills, interrupt channeled abilities, or buy your allies time to escape.

Eternal Devotion, Uther's trait, has gone through some significant changes and nerfs throughout the course of the beta, but it is still a fairly useful trait. When Uther dies, his spirit remains on the battlefield for 10 seconds. During this time, he can heal his allies with Flash of Light - a fairly weak heal with a very short cooldown. 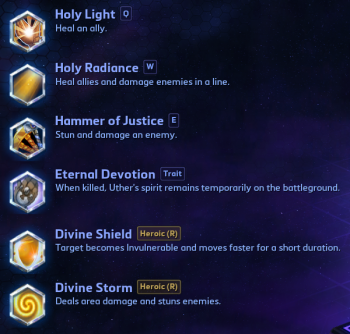 When it comes to heroic abilities Uther, has two strong choices, depending on how you want to play him and what the enemy team composition is. Divine Storm (R) is an area-of-effect stun that can really set your team up for some devastating combos if it is used properly. The downside is that is a melee ability, so to use it to maximum effect, Uther has to be in the middle of the enemy team and he will often get burnt down before he is able to get the skill off.

Divine Shield (R) is a defensive ability that grants its target a movement speed boost and invulnerability for a short time. I'd advise picking this skill if you are trying to play Uther as more of a backline healer type character since it is a ranged ability and thus doesn't require you to jump into the middle of the fray like Divine Storm. It is also a great counter to single-target nukes like Nova's Triple Tap or Kael'thas's Pyroblast.

Uther is fairly versatile as far as builds go and he can be played as a frontline healer and minor off-tank or a pure backline healer, depending on which playstyle you prefer. Neither one is necessarily easier or better than the other, so the choice really comes down to individual preference. Due to the amount of variation in Uther's builds, there aren't too many mandatory talents, but there are a few tiers that are worth discussing in detail.

At level 1, I highly recommend going with Conjurer's Pursuit ,which increases your mana regeneration every time you gather three health globes. Without this talent you'll often run into mana problems throughout the course of the game. The increased range that Reach gives Holy Light isn't a bad choice, especially if you want to try playing Uther as a backline healer, but once again you'll run the risk of running out of mana and not being able to heal anyone, so I still think Conjurer's Pursuit is the safer choice.

Shrink Ray or Blessed Champion are both decent choices at level 13. Shrink Ray reduces the target's damage and movement speed by half for a few seconds and is one of the best support talents in the game. Blessed Champion makes the first basic attack you do after using Holy Light heal all nearby heroes for a small amount, so it can be pretty good for a frontline healer build, but I still think that Shrink Ray is the better choice.

Level 20 is a difficult tier as is often the case. The upgrade to Divine Storm can be very strong, but I don't feel that it is worth taking, since it simply doesn't add very much to the skill. Storm Shield is great for adding to your team's survivability as it grants them all a very strong shield that lasts a decent amount of time. The other option is Benediction, which revives Uther at the location of his spirit once Eternal Devotion ends. This ability has a very long cooldown, but it can be extremely helpful for quickly getting back in the game during those crucial endgame team fights. Honestly, there is no right or wrong choice in this tier, and it really comes down to your playstyle. However, if you want to play it safe, I would go with Storm Shield because it is a great all-around talent.