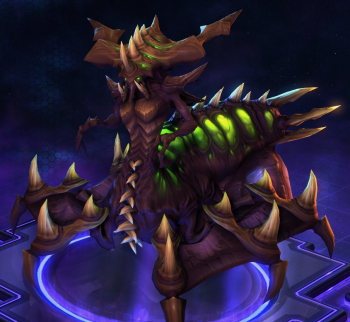 The Zerg Broodmother Zagara is a ranged specialist from the StarCraft universe that excels at aggressively pushing lanes and taking down enemy structures. This makes her very strong in the early game, and if played right, she can really help her team take the lead in terms of levels due to how much experience towers and forts give when destroyed. Her strong pushing power is made up for by the fact that she is very squishy and has few escapes, so positioning is key to Zagara's survival.

Baneling Barrage (Q) is a ranged skillshot that launches four banelings that explode on contact with the enemy and do a high amount of splash damage. The AoE effect makes this a great skill for clearing minion waves and mercenary camps. In addition, the banelings can also soak a few shots from enemy structures, but I don't recommend using them in that way unless it's a matter of life or death. The biggest weakness of this skill is that because of it's slow travel speed, it can be easily dodged by opposing heroes.

Hunter Killer (W) summons a Hydralisk that will chase its target to the ends of the earth until it expires or is killed. This is Zagara's main source of hero damage and is one of the strongest attacks in the early stage of the game. The hydralisk is great for pushing back enemy heroes, as there aren't very many heroes who can safely tank the damage it will dish out. That being said, it is important to remember that the hydralisk will only attack a single target and will vanish once that target is dead, so it should be saved for heroes.

Infested Drop (E) delivers a small amount of damage in an area and summons two Roachlings. The Roachlings do a fair amount of damage, but they can also be used to help soak ammo from enemy structures, push lanes, or take merc camps. 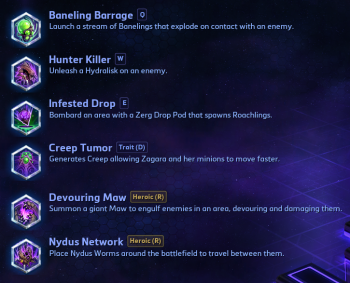 Zagara's trait is an activated ability: Creep Tumor (D.) Zagara has increased health regeneration and movement speed while standing on Creep, so it should be spread as much as possible to help ensure she has a means of escape. Additionally, Creep also grants vision to Zagara and her allies, which can be used to grant advanced warning to your team. Try to place the tumors near high-traffic areas such as objective spawn points or merc camps so your team can keep an eye on what the enemy is up to.

Zagara's choice of heroic abilities is a bit more limited than some other heroes, because while Nydus Network can be useful for split pushing and capturing merc camps, it is fairly useless in team fights and Heroes of the Storm is a very team-oriented game.

Devouring Maw is a far stronger choice for team fights as it is a strong crowd control ability that can be used to remove key targets from a fight or set your team up for some very strong wombo combos. It can also be used defensively to interrupt channeled abilities. On that note it is also the only skill in the game that can interrupt Diablo's Lightning Breath.

As is always the case, your talent choices will vary from match to match, so none of the following recommendations should be considered gospel. Still, there are a few talents that can really make life easier for Zagara, especially if you are new to to the game or the specialist role.

The increased health regeneration from level 1's Reconstitution can be a life saver - assuming you've spread your creep properly. Demolitionist's increased structure damage and ammo-leach can make it a tempting choice if you have teammates helping you push, but if you do have a strong push going, then you normally won't need the extra damage, and your minions can soak the ammo well enough on their own.

The reduced cooldowns usually make Battle Momentum an easy pick, but Zagara actually has two strong options at level 7. As was mentioned above, Zagara is rather squishy, which is why Rapid Incubation is such a strong pick at this level. The extra damage that Battle Momentum provides is very handy, but the ability to rapidly restore your health and mana makes Rapid Incubation the safer choice.

At level 20, I highly recommend going with Bolt of the Storm to give Zagara a much needed means of escape.