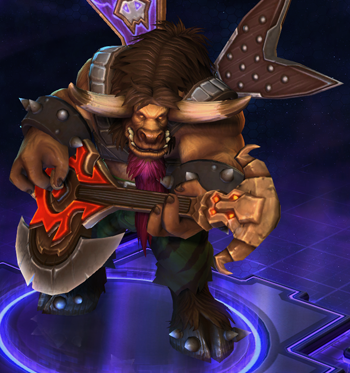 The Elite Tauren Chieftain - or E.T.C. as he is more commonly known - is a Warrior from the Warcraft universe that focuses on displacement and disruption. His high health pool and strong crowd control make him one of the most popular tanks in the game. He doesn't do very much damage, but he is great at setting up kills and protecting the members of his team that do deal a lot of damage.

Powerslide (Q) is a dash that deals a small amount of damage and stuns any enemy it hits. As with Muradin's Stormbolt, the damage isn't nearly as important as the stun. This skill allows E.T.C. to interrupt channeled abilities and intercept fleeing targets, which leads into one of the key aspects of playing E.T.C. well: body blocking. Put simply, it is standing in front of your team's target so they can't escape, and the dash on Powerslide makes it great for that. Powerslide can also be used defensively to get out of dangerous situations.

Another important aspect of playing E.T.C. is knowing how his Powerslide and Face Melt (W) work together. Face Melt does a minor bit of damage and knocks any enemies away from E.T.C. This is great for sliding into a group of enemies and knocking one of them towards your team to set up a quick kill. It can also be used defensively to push pursuing targets away. Like with Muradin's Haymaker, players need to be careful that they don't accidentally push enemies away from their team when teammates are attempting to secure a kill.

Guitar Solo (E) is one of the keys to E.T.C's tankiness. It allows him to regenerate a decent amount of health over a few seconds. It's not nearly as strong as Muradin's Second Wind, but it does help to keep E.T.C. in fights. 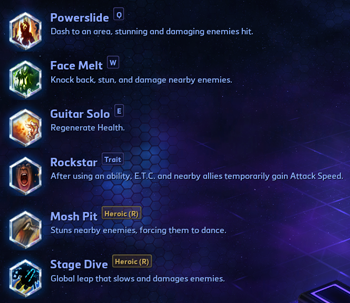 Rock Star is E.T.C.'s passive trait that triggers whenever he uses a basic or heroic ability and grants an attack speed boost to all nearby heroes. It might not seem like much, but it can be a significant buff, especially to heroes like Illidan or Valla that naturally have high attack speeds.

When it comes to heroics, both Mosh Pit and Stage Dive are strong, and the choice really depends on your playstyle, how the game is going, what map you're on. Mosh Pit forces all enemies around E.T.C. to dance, which stuns them for several seconds. It is one of the strongest AoE stuns in the game and can be devastating in the right hands. It also combos very well with Power Slide, since you can simply slide into the enemy team and then use Mosh Pit to set your team up for some great combos.

Stage Dive really shines on large maps such as Cursed Hollow, because it allows E.T.C. to teleport anywhere on the map, damaging and slowing any enemies caught in it's area of effect. The biggest strength of this skill is that it gives E.T.C. a global presence, allowing to quickly join team fights or capture objective points with relative ease.

As I mentioned above, both of these skills are viable, and the choice really will vary from game to game, but for new players I would recommend Mosh Pit simply because it fits very well into E.T.C.'s kit.

In terms of talents, there isn't really any one build that is the best for E.T.C. and, unlike some characters, you won't be building around a single ability like you can with Raynor or Valla, so the choices really do depend on how the game is going.

If you feel like you are taking too much damage, then you should focus on talents that increase your survivability, such as Block and Spell Shield, or focus on talents that increase the health regeneration from Guitar Solo. Keep in mind that Block is on the same tier as two talents that buff Guitar Solo, so you'll need to decide whether damage negation or health recovery is more important. As always, that decision will be heavily influenced by the enemy team composition, since Block shines against heavy hitting auto-attack heroes, but is useless against heroes who rely on ability damage.

In general, E.T.C. is already very tanky and difficult to kill, so unless you are just going up against a very heavy damage team you probably won't need too many talents that boost sustain. So in most cases I recommend talents that increase the usability of E.T.C.'s crowd control abilities.

There are several strong options at level 20, including the upgrades to your heroic. Tour Bus allows E.T.C. to use Power Slide during Mosh Pit, which can allow him to catch other targets in the stun. Crowd Pleaser is a fairly straightforward buff to Stage Dive that increases the radius of effect and reduces the cooldown for every enemy hit. Death Metal is a fun talent that casts Mosh Pit whenever E.T.C. dies, even if he took Stage Dive. My big problem with this talent and ones like it is that I don't like talents that plan around your character dying, since ideally you should not be dying.