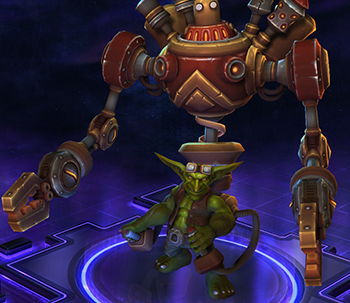 Gazlowe is probably the most complex character on this list, and playing him takes awhile to get used to. However, once you master the basics of his playstyle, he is a very rewarding character to play due to his strong pushing power and his ability to contribute well in team fights. One of the things that makes Gazlowe a bit complex is the fact that even though he is listed as a melee specialist, nearly all of Gazlowe's abilities are ranged skills, and depending on your playstyle, you may very rarely engage in melee combat.

Rock-It! Turret (Q) places a turret on the ground that deals damage to nearby enemies. This is a great skill for pushing lanes, as the turrets can be used to damage and soak ammo from enemy structures. It also shines during team fights around objectives as it can be used to zone out the enemy team, and on maps such as Cursed Hollow, the turrets can be used as a form of disruption to keep the enemy from gaining the tribute, since any amount of damage will interrupt the process.

Deth Lazor (W) is a channeled ability that increases in range and damage the longer the skill charges. It takes a few seconds to charge and has a fairly long cooldown, but it is useful for both clearing lanes and can do a strong amount of damage to clumped up targets in team fights if you let it reach its maximum charge.

Speaking of charges, Xplodium Charge (E) throws out a bomb that deals damage and stuns any enemies caught in the area after a short delay. It is a useful skill for both laning and taking merc camps, but it is a bit difficult to land in teamfights thanks to the delay, but that can change depending on your choice of heroic.

Gazlowe's trait, Salvager, allows him to recover scrap from his turrets and enemy structures. You can also press D to automatically destroy your turrets and collect scrap from them. This scrap restores mana and makes his cooldowns recharge at a much higher rate for a few seconds. Both of these are very helpful as Gazlowe relies heavily on his abilities, and they all have long cooldowns and fairly high mana costs. This means effectively managing your scrap is an important part of playing Gazlowe. 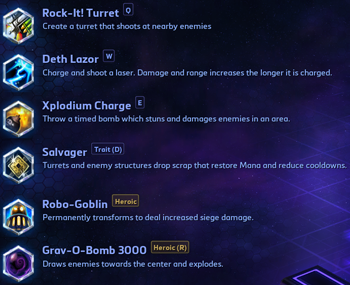 The choice of your heroic ability is actually even more important on Gazlowe then it is on most other characters because it will really determine your approach to the rest of the game. Robo-Goblin is the go-to choice if you want to focus on taking merc camps and split-pushing because it massively increases the damage your basic attacks do to non-heroes. In my experience, I've found this ability really shines on larger maps where you can split-push with less risk of running into the enemy team.

If you are planning on playing more team-oriented then you should go with Grav-O-Bomb 3000, which is an AoE that pulls all enemies into the center of its area of effect and deals moderate damage. This skill combos very well with Xplodium Charge as you can simply throw down a charge and use your heroic to pull enemies into the explosion and stun them, setting your team up for some very strong combos.

Your talent choices will really depend on whether you are planning on playing Gazlowe as a split-pusher or team fighter, as certain talents such as Superiority are very useful for split-pushing, but useless in a team fight. For example, if you wanted to go for a team fighting build, then the two upgrades to Xplodium Charge at level 1 and level 16 can really add to the damage you do with the combo of Xplodium Charge and Grav-O-Bomb. The level 1 talent, Extra TNT, increases the amount of damage your charge does for every enemy caught in it, and the level 16 talent, Kwik Release Charge, gives you a second charge of Xplodium. Keep in mind that if you do choose to go with Extra TNT then you'll be giving up two talents that buff your trait. Scrap-matic-Smelter increases the amount of mana you gain from picking up scrap and Break It Down further increases the cooldown reduction from scrap. Both of these are very good, and honestly, I would advise going with one of them at level 1 over the extra damage from your E simply because it doesn't provide a lot of benefit in the early game.

Another very viable build for Gazlowe is the turret build. This is actually my favorite build for him and is the most versatile because there are many talents that modify his turrets in different ways. The first major improvement comes at level 7, when you can choose to take Rock It! Turret XL which allows your turrets to attack two enemies, or Engine Gunk, which applies a slowing effect to your turrets' attacks. At level 13, you can add a third charge to your turrets by picking up Turret Storage, and level 16 offers a fairly decent range increase - Long-Ranged Turrets.

I haven't spoken much about builds centered around Gazlowe's W, and that's because I don't find the Deth Lazor build to be all that effective. There are a couple of decent talents for it though. Level 13's EZ-PZ Dimensional Ripper allows the lazor to slow enemy heroes and will lock down structures and minions. This makes it a viable choice in a split-push build, but I think there are better options at this range for team fighting. Hyperfocus Coils greatly reduces the cast time of Deth Lazor, but it's on the same tier as Long-Ranged Turrets, Kwik Release Charge and Stoneskin, and honestly I think all of those are stronger choices.

The upgrade to your Grav-O-Bomb at level 20 can be a strong choice, as it adds a bit more range and damage. The upgrade to Robo-Goblin increases your basic attacks against heroes so it can help in teamfights, but honestly I feel like it goes against the spirit of the a Robo-Goblin build. Hardened Shield is another strong choice, as Gazlowe can be very squishy, so the extra survivability helps. Fury of the Storm is strong in a split-push build because it helps you gain merc camps faster and push lanes. None of these are really bad choices - it mainly depends on how the game is going. However, I do think the upgrade to Robo-Goblin is the least desirable.