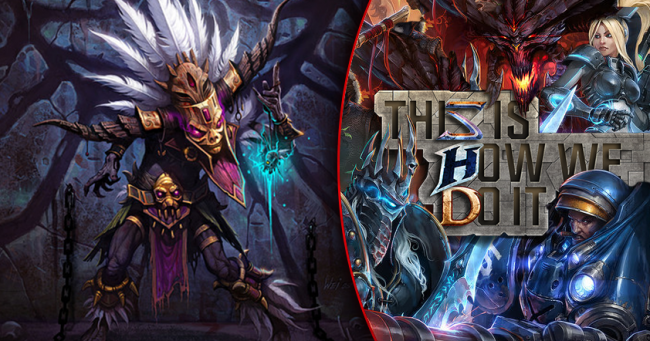 Check out our other Diablo 3 guides!

One of the classes that received a lot of love in Diablo 3's patch 2.3 is the Witch Doctor. While the Dagger of Darts build reigned supreme for the past couple of patches, a new contender has entered the arena in the form of the revised Helltooth set. Once useless, the set has been updated to now be competitive with the Darts build, and we present here a Helltooth build that focuses on firing off Zombie Bears. We'll give a rundown on the skills, gear, and paragon points you want to use to optimize this build. 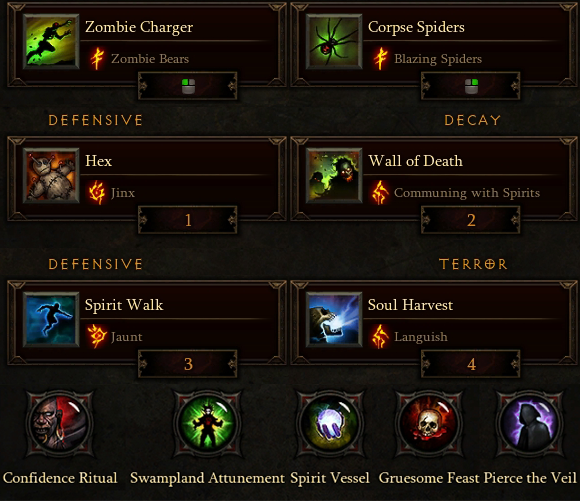 Zombie Charger - Zombie Bears: This will be our main attack skill. Our choice of weapon - Scrimshaw - is what makes this skill shine, but more on that later.

Corpse Spiders - Blazing Spiders: We want to spam our zombie bears as much as possible, and that means we'll need mana. Blazing spiders will help us out with that.

Wall of Death - Fire Wall: The image shows Communing with Spirits as the rune to take, but upon further reflection, Fire Wall is the superior choice. The Wall of Death runes that create rings instead of lines are more difficult to aim, because the spot on which you cast the spell - the center of the ring - is unaffected. Enemies need to touch the ring itself, not be within it. Further, Fire Wall dishes out a ton of damage, and Wall of Death is central to this build.

Spirit Walk - Jaunt: You hardly see a Witch Doctor build without this skill. It is both an escape and a mobility skill, and since we'll be in the thick of things with this build, the ability to escape if you get overwhelmed is critical.

Soul Harvest - Languish: It buffs your damage, it buffs your toughness, it crowd controls your enemies, it allows for 100% uptime... is there anything this skill doesn't do?