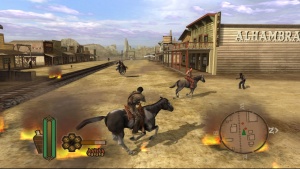 The Games play best when their interfaces are transparent, and the disconnect between player and game starts to vanish. Loading up game screens with buttons only serves to diminish immersion. I'm looking at you, Twilight Princess, and the ugly graphical representations of the Wii controller you stick all over the edges my screen. I know it's a Zelda tradition to clearly show the controls mapped to Link's tools at any given moment, but must I really admire such a beautiful game through a tangle of Wii remote glyphs? I have to believe the minds behind Nintendo's most brilliant first-party titles can do better.

same goes for inappropriate use of onscreen mini-maps and radar. At some point during the horseback firefights in Gun, for example, I realized I was spending more time watching the radar-style mini-map in the bottom corner instead of the action on the rest of the screen. Sure, the mini-map conveniently depicted the locations of my enemies, but it also had me ignoring the imaginary world around me. And just as importantly, why is there an omnipotent onscreen mini-map in a Wild West game? It's one thing to have a radar display in a game like Halo, where it makes some sense. Unlike Spartan-II super soldiers, cowboys should not have high-tech enemy locators.

Poor use of waypoints is another common stumbling block. Consider the illuminated pathways in Perfect Dark Zero whenever the player loses his way. They're useful, to be sure, but they've got no place in the universe the game creates. Contrast this method with the one employed in Shadow of the Colossus, where the player wields a sword that when held to the sun focuses a beam of light in the direction of the goal. Perfect Dark Zero's method is intrusive and inelegant (and arguably a band-aid for poor level design), while Shadow of the Colossus' smart solution adds a sense of wonder to the game. 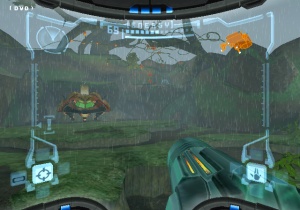 I'm not suggesting that interface contrivances need to be done away with completely. There's a time and place for onscreen indicators of all shapes and sizes, they just need to be implemented thoughtfully. Samus Aran's Combat Visor in the Metroid Prime games is a perfect example. It provides the player with a detailed onscreen display that's more than just a convenient interface. It's an integral, stylish part of Samus' character. Even when the player jumps to a map screen courtesy of Samus' onboard databases, the world's context remains intact.

There's no shortage of games that employ interface features that have been lazily appropriated from previous titles simply because they're easy to implement. And many of these are good games. They're just not as good as they could have been. Interfaces that draw upon the game world itself rather than the controller hardware are better for their creativity. Keep the buttons on the controllers, and out of the games.