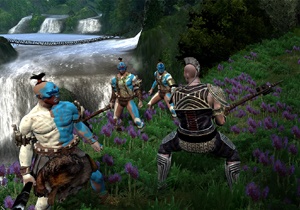 And so I became the proud owner of Age of Conan on launch day, and over the past week I've been enchanted enough to spend every evening, sometimes into the wee hours, hacking and slashing from one victory to the next in search of new abilities, trinkets and areas. The same itch that WoW once scratched is back, and with a vengeance

It's been a very long time since a new PC game prompted me to run out and make an unplanned video card purchase. I'm pretty conservative in my PC spending habits. I think the last title that had me absolutely dying for new hardware was Half-Life 2. Crysis didn't even motivate me to upgrade Just a few nights with AoC, and I was seized with a somewhat irrational need for a new GPU. Sure, my old card ran the game just fine, but only at medium settings. Unacceptable! My Hyborian experience was incomplete without the finest quality image processing, so it was off to the store for new hardware. Now I explore Conan's world in its fully-filtered, shaded, anti-aliased glory.

It's impossible for me to pass any sort of judgment or make any sort of predictions about AoC at this point, as I've only rolled up two characters, and I haven't leveled either past 23, but so far my experience has been very gratifying, even in the face of the hiccups and bugs that seem par for the course for most newly launched MMOGs. AoC's combat is more complex, varied, and visceral that in other MMOG's I've played. The landscape is more easily traversed, the quests so far are more fast and frequent, and death doesn't carry quite the same sting. From my relatively inexperienced perspective, it looks and plays like a smart, friendly, thoughtfully built game.

I don't know if AoC is the MMOG that will finally find a lasting place in my gaming activities, whose shortcut icon will become the beloved gateway to endless questing. If my past experience is any indication, before this summer's over I'll probably have moved on to other games. For right now I'm clinging to the hope that I might see it through, that I'll finally push an MMOG character to the highest levels. Right now, AoC feels just friendly, fresh, and new enough that I might have a chance.