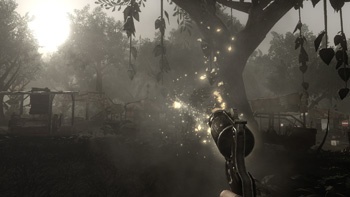 I'm enjoying my trip through Far Cry 2's nameless African state. I'll admit it's not the most inviting place, what with all the local warmongering and civil unrest in the wake of its governmental collapse. And I'd be farther along in my hunt for the Jackal, a notorious and enigmatic arms dealer, were it not for the malaria epidemic. Damned mosquitoes.

Luckily, the malaria's totally under control. Most of the time I don't even notice it. It's only when I'm hit with a sudden "malaria attack" (deep whooshing sound, unsteadiness, yellow-green fog in my field of view) that I reach for my incredibly effective medicine. One pill, and the symptoms are gone.

Gunfire is more problematic. Not to mention the explosions. And the flames. I get shot, blasted, and burnt a lot. Though the folks that I meet inside Far Cry 2's broken-down towns and humble abodes are usually civil, everyone else is relentlessly homicidal. If I pass another driver on the road, he'll immediately try to run me down. When I meet a guy wandering down a jungle path, he'll unload his shotgun in my direction. If I'm leisurely boating down a lovely waterway, the stooges on the shore will take potshots with RPGs. I have no idea who these people are or which of the local factions (if any) they're affiliated with. They never bother to find out who I am. They just try to kill me.

I can take these guys out easily enough, but they're never gone for long. I'll clear an entire roadside checkpoint of ne'er-do-wells en route to the local weapon shack, but on my way back, not a half-hour later, they'll have been replaced by new sentries. And they'll be shooting at me again. The only places enemies don't return are safe houses, conveniently scattered all over the place, where I can rest up and fast-forward time with my wristwatch.

I've learned to scavenge for first aid kits that contain medication-filled syrettes. They're conveniently located anywhere I'm likely to get shot. Which, as previously noted, is pretty much everywhere. As long as it's not malaria or a near-death injury, whatever's in these syrettes will cure it. I have pair of pliers and a knife for digging out bullets when I'm in really bad shape. Major gunshot wounds aren't all that bad as long as I yank the bullet out from under my skin right away.

Once in a while, I don't get to the syrettes or pliers in time. I'd be a goner if it weren't for the various guns-for-hire I've met in my travels. These guys have a knack for showing up just as I'm about to die. I'll be face down in the savannah, bleeding out, when sure enough one of them will appear and drag me to safety. Once I'm back in action they disappear. It's handy, having them around to save my ass, but I have to wonder: don't they have anything better to do? How exactly do they know when I'm down? And why don't they ever want a ride back to town?

Grasping At Immorality: A Tale of Two Games Andy Chalk 66 Comments
Comments on