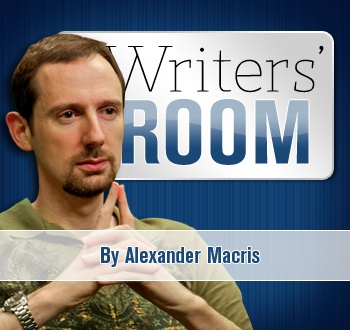 The recent interview The Escapist conducted with Mike Mearls, D&D Manager for Wizards of the Coast, has provoked a remarkable amount of controversy, with threads on Penny Arcade's forums and a monstrous 34-page thread on RPG.net. I'm not sure if I'm pleased or bothered by the volume of response, but I have read them all and noticed a few recurring items. Among the concerns raised repeatedly have been:

Considering all of the outcry, it seems a worthwhile exercise to provide some explanation, lest someone start an "Alexander Macris ruined everything" thread.

Let's start with point (d): The "Mike Mearls ruined everything" thread on Enworld. Yes, it's a joke! I got it. But why is there a joke about Mike Mearls ruining things? There is, after all, no thread that says "Chris Pramas (designer of the Dragon Age RPG) ruined everything." The joke only exists because there are lots of people who do believe Mike Mearls (or others associated with D&D 4th Edition) ruined everything. The posters on Enworld are making light of this fact, and therein is the humor - they've co-opted the attack on Mearls and made it into a joke. But that doesn't disguise the fact that there's an underlying attack. I apologize to everyone who was confused by this, especially the actual Mike Mearls fans in that thread. As I said on the thread itself yesterday, I thought I was engaging in dry wit, seeing as I linked the post directly for our readers. But my subtlety failed on the high tension wires of the Internet.

Moving on to point (c): When we run interviews in The Escapist magazine issues, they are always conversational pieces similar to what you will read in Rolling Stone or Vanity Fair. I have to wonder if much of the criticism of the interview format is simply because so few outlets write this sort of journalism about the gaming industry. In any event, at the end of this foreword, we've published the entire recorded conversation with Mearls for anyone who is interested. I'll be interested in learning what people conclude after reading the full transcript.

With regard to point (b), whether or not D&D is in a "death spiral"; the words are Ryan Dancey's, not mine. You can find the discussion on this point here. I wanted to give Mearls an opportunity to rebut Dancey on the record, as I believe that the entirety of 4E Red Box and D&D Essentials is a rebuttal of Dancey.