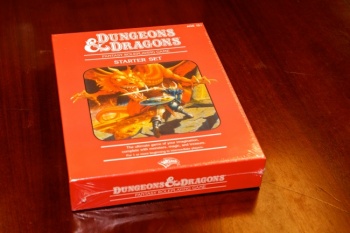 Mike Mearls: It's interesting. In some ways, bringing in new players leads you to a path where then you end up with classes that feel very different. One of the things, when you're dealing with new players, sit someone down to play D&D, and let's say you're going to play Essentials, you're going to play 4th Edition, or you have Red Box, stuff like that - you can just tell somebody, hey do you want to play a guy with heavy armor with a big weapon, kind of describing a fighter and he'll say "Yeah, that sounds fun." And then you say "Look, do you want to carry a shield and be more defensive or do you want to carry the biggest axe you can find and be really good at hacking guys in two?" When you have that very visceral choice point for a beginner, it's something they can understand - they don't know the rules, but they understand the difference between being more defensive and being more offensive.

Then you extend that to other classes, where it's really important to have that different feel because otherwise, especially for beginners, it's easy to lose track of "well, you're giving me all these choices, but what's really different?" If you want to sell me on this, and say what's interesting about this class and why should I pick it, you need those very visceral, big differences. That just flows into the rest of the design where you just look at it and say "if that's good for beginners," and if you look at advanced players - I mean, if you look the 4th Edition handbook and you look at those players - you have to be well versed in D&D to understand the difference between the classes. It's the old - I see this comment a lot online - "It doesn't read very well, but it plays very well."

I think what we were looking for in Essentials, especially for beginners, because there's plenty of people out there who have stopped playing D&D - you want them to go "This reads well too," because you're dealing with an audience that isn't already playing your game. So if you have an audience that's established, you can be more technical in how you approach them - because they speak the jargon, they get it. But with the new audience, or returning audience, they want big-picture ideas they can latch onto.

Just going forward from a design standpoint, when you have more visceral design like that, I think it just leads to more interesting challenges for designers. You're looking at things in more of a world point of view - "What is this guy doing in the world of D&D and how do we express this mechanically," rather than vice versa.

The Escapist: There's a guy named Justin Alexander who's a really smart blogger about D&D and one of his criticisms when he reviewed 4th Edition was that so many of the game mechanics have been disassociated from the world. That is to say, had been designed not considering what the person is doing in the world. When I read Red Box, it actually seemed like some of those concerns had been addressed. Reading Red Box, it basically felt like "Oh this is D&D, I get it, and this is simulating this fantasy swords and sorcery reality." It's interesting that that was intentional.

Mike Mearls: It's funny you brought that up because I'd read that blog entry. It's definitely something we thought of because if you're an experienced player and if you're willing to give some allowances to how the game works vs. how you think reality should work, you're probably in a narrative mode. It's especially easy for experienced roleplayers. If you're more into the narrative side of gaming, you're used to taking mechanics and interpreting them to say "well this is what just happened." But I don't think that's a mode of people who haven't played RPGs before, who don't necessarily think in a narrative fashion are used to. Because it happens after the action.

If you're playing the game and you attack an ogre and something happens, unless your mind is attuned that way, it's really hard to go "okay, I need to stop the action, pause, something just happened and now I have to explain it after the fact." I'm not in the flow of the game of saying "I'm going to use the ability that will let me charge and attack three guys." So I run forward and I know that as I run forward and I leap in the air and swing my axe in a broad arc and attack three guys. There's much more flow there in the action of moving your figure using the miniatures, you're rolling the dice to do the attack. It matches up very nicely to what is happening in the game. You're not doing it and saying "oh, this is what happened." Because it pulls everyone out of the action.