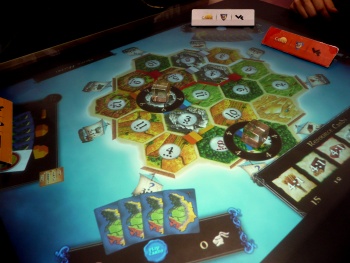 When I was at Gen Con last month, one of the bright spots of the weekend was the hour that I spent playing Settlers of Catan in the Mayfair booth with some fellow conventioneers. I traded wool and ore and got into a race for the longest road with another player. Eventually, I won the race and was awarded the Longest Road for two victory points, the last that I needed to win the game. The red player shrugged, congratulated me and then walked off to grab some food with her friend. She missed out, because I was able to read an almost mind-numbing amount of statistics about the game we had just played, from how many sheep I had shorn to the number of trades that I completed. We didn't even have to clean up the pieces before restarting the game.

You see, I had just played Catan on the Microsoft Surface. Halfway between board game and videogame, the experience combined all of the tactile and interpersonal fun of sitting around a table talking to real people with the ease of play and computational advantage of playing on a computer. There have been videogame adaptations of Catan before, but this one felt like I was playing a digital boardgame. It was fun, just like all those times playing Monopoly or Risk with my friends growing up.

The Microsoft Surface is a table-sized computer with a multi-touch screen. It uses cameras and infrared technology to sense whatever is placed on the surface, from fingers to objects to bar-codes. The gaming implications of the Surface are immediately apparent. The Escapist Editor-in-Chief Russ Pitts saw a group of Carnegie Mellon students write an application which uses it to play Dungeons & Dragons at GDC 2010. Joe Engalan, Executive Director of Vectorform and Eric Havir from the Microsoft Surface team, sat down at GDC with Guido Teuber, Managing Director of Catan for Mayfair Games. From that meeting, work began on Catan for the Microsoft Surface.

"Guido offered 'Make Catan on the Surface,'" producer Mollie Harms told me at Gen Con. "Eric and Joe are huge fans [of Catan] so they snatched it right up, came back to Vectorform and started production on it." The team of about five or six designers and developers has been working on the project since then and they were happy to demonstrate it for the first time at Gen Con.

The interface takes a bit of getting used to, but you soon realize how intuitive it is to slide various game pieces across the digital board. The dice are two clear plastic cubes with no visible markings on them. When you roll them on the surface, however, the sensors read the infrared labels and display the correct numbers. Each player is automatically given the right resources, which are displayed as cards. The neat part is that the cards aren't readable unless you have a "visor" that is coded to each player. By moving the visor, the resources that you have in your hand are displayed to you but are invisible to your opponents.

You can then trade with your fellows, which was easily my favorite part of the experience. Once you agree on the terms, you put your finger on the resource card and fling it across the table to your trading partner with a flick of your finger. Sometimes the card "bounces" around a little but you can touch the resource card and drag it to your hand. You don't have to fling it; obviously, you can also courteously slide it towards your trading partner. Ultimately, it feels like you are trading in the real game; I often throw resource cards at my rivals with the physical Catan as well.

There were a few quirks with the touchscreen though. When you have a lot of resource cards, they get smushed together and it can be really hard to put your finger on the one that you want. One of the players at the table tried to pick out a piece of ore from his hand but the system just wouldn't let him grab it. The devs came to try it and were equally frustrated. Through a series of hand waves and voodoo gestures, she was finally able to pry that piece of ore loose and exact the trade. Harms later told me that they were experimenting with a different interface, one based on icons, which would solve that problem. But that's part of the fun of demoing a product that is still being tested and developed; you get to see the process.