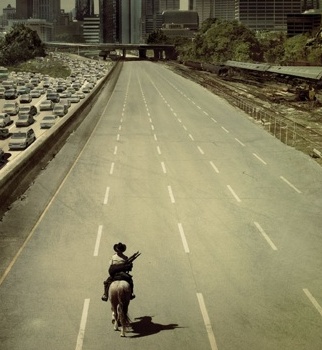 I have what appears to be a perfectly legitimate reason for not having yet seen AMC's The Walking Dead: I don't have cable. I know: AMC has made it available to stream for free; I have no excuse. Shame on me. There is an excellent possibility, however, that--even if I did have cable--I still would resist the urge. Crazy, right? Well, my reasoning is pretty simple: I haven't read the comics yet.

It is difficult--not impossible, but difficult--to stay entirely unspoiled when it comes to entertainment, particularly if you spend any amount of time keeping up with media-related news on the internet. There are ways to get around this, obviously, but I am blessed with both an aversion to spoilers and a fairly obsessive personality. Allow me to provide an example of the resultant hijinks: this spring, I decided that I wanted to catch the LOST finale. Having never seen an episode, I gave up sleep for two weeks and marathoned the entire series up to that point. Yes, I was paler and more jittery than usual, but I was able to watch the finale live and jump headfirst into the ensuing arguments.

Adaptations provide a different sort of spoiler, and a more complex dilemma to boot. As a rule, I will not see a film or television adaptation unless I have read the book or comic upon which it was based. Scott Pilgrim vs. the World provides an excellent example; the film came out just as I was finishing the books. Had I not been done, I would have waited that sucker out until I had finished consuming the source materials. This "read first" approach creates issues beyond lack of sleep and the unrestrained judgment of others; sometimes the temptation is just too great. I have not read a single Kick-Ass comic (I'm getting to it, I promise!), but I could not resist the lure of that movie. I know that I'll still enjoy the comics, but--for me--the experience is lessened.

Why? The changes made while shifting the property from one medium to another would still exist, and be incongruous, even if I viewed the movie first. Whenever these adaptations take place, the plot usually emerges reasonably intact on the other side (this usually happens-I'm looking at you, last twenty minutes of Watchmen). Yes, casting What's-His-Face might have been a travesty, and the omission of that incredibly important, albeit tiny, detail makes my blood boil over, but that doesn't mean seeing the movie first will ruin the source material. Right?

If the source material were good-and nowadays, a great deal of it is-then it has been recognized and singled out for adaptation based upon its extant merit. The author, writer, penciller, artist, inker, whomever: these individuals worked to create a piece of art to stand on its own. I feel as though I'm doing them and their work a disservice if my first exposure to their work is an adaptation. Then again, my first exposure to Batman was Adam West in syndication, and I certainly haven't read Notre-Dame de Paris in its original French, so my theory admittedly has some big honking flaws. Nevertheless, given the option? I will wait until an adaptation hits my Netflix queue before I'll spoil the written piece for myself.This does prevent me from enjoying the resultant adaptation as its own piece of creative content, and that's an understood tradeoff. Life isn't fair, choices have consequences, and I saw Kick-Ass anyway.

If you're wondering why on earth you should care, I don't blame you. I'll also tell you why, buddy: it's because I'm not the only one. Spoiler-free freaks, obsessives, purists-- these are archetypal figures in most fandoms and circles of geekery. You may be one yourself; you likely know one through some shared passion or another. I understand how tempting is it to punch us square in the nose when we stick our fingers in our ears, hollering,"la la la la can't hear you la la la LA LA." I can understand how funny it might to bait us, presenting the opinion that "the movie was better," only to set us off and watch us break some stuff. I get it. I just wanted to provide some insight into one spoiler-free obsessive's thought process, to perhaps save another of my kind from a ruined property, or an assault charge.

What of The Walking Dead? I'll watch it, of course. I'll get my hands on the comics and rip 'em up (metaphorically, I mean; I'll just read them really quickly) and then figure out how to get back to "Days Gone Bye." Just try not to tell me too much of what happens between then and now.