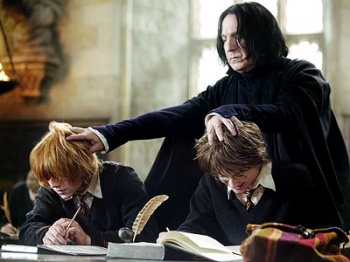 There hasn't been enough Harry Potter talk lately. I've heard barely a peep about our intrepid trio of heroes or He Who Must Not Be Named. Luckily, I'm here to fill that void. For some reason, today feels like an appropriate day to defend the adaptation of the Harry Potter books into insanely popular films. The all-encompassing motive for hating on the Harry Potter films is "the books should never have been adapted in the first place." This argument can obviously be broken down into sub-arguments about details, casting, scope, and artistic integrity, but "never should have happened" is the big one.

The rejoinder to this argument: The Harry Potter books totally should have been made into movies, and I'm fervently glad they were. My sub-arguments, below, break down the groups the films will positively affect: adults, kids, and people who hate/shun/burn Harry Potter books on ethical grounds.

That last one is, I confess, supposition, but it's a logical one. I've met a few handfuls of folks who will not read, and have forbidden their children from reading, Harry Potter. They consider the material dangerous, unhealthy, immoral, etc. I have chosen not to argue with these persons, but that's because I'm not particularly argumentative. If I were to argue, I would emphasize that the overarching theme is that love trumps everything, even magic. It'd be a short quarrel, though, as none of my anti-Harry acquaintance have ever read the books. People who refuse to read the books on moral grounds have a momentous task facing them in their crusade. That's a lot to read, all seven books, 4,175 total pages to consume. Compare the time involved to the viewing time of the movies. There are two outcomes to not-having-read-the-books-haters watching the Harry Potter films. They either realize their vitriol was poorly founded, or absorb some material to appropriately discuss and defend their position. It's a win-win situation.

Other anti-Harry camps argue kids who watch the movies won't have any interest in reading the books, and the movies are thus contributing to literacy's downfall, but nothing could be further from the truth. Think of this as yourself, as an adult, for a moment. Imagine you've just seen a movie that you really enjoyed. It resonated with you, sparked your imagination, left you wanting more. If I tell you that the film you enjoyed was based upon an incredibly popular series of novels, and that those novels hold even more imaginative detailed goodness than the film you loved, would you not hightail it to the bookstore/internet and get yourself a copy, or ask if I had one you could borrow? Kids are dumb, but only because there are things they haven't learned yet. Kids are not innately stupid, though, and understand more than we give them credit for grasping. Tell them that there's more Harry Potter to be had, and they'll pick up the book. Don't assume things for them. It's not Anna Karenina, it's Harry Potter: it was written with children in mind.

While we're on the topic of the generational gap, let's address the adults. While the Harry Potter films rightly encourage kids to read, they prevent adults from having to do so. Get your fingers off that keyboard and quit composing those flames; I'm going to explain. J.K. Rowling is a terrific storyteller. She created a universe that is uniquely charming and frightening all at once, and the tale she told in the Harry Potter novels is an impressive achievement, as it can be enjoyed by both children and adults. The emphasis here is on can. The books were intended for a younger audience, and there are some adults who cannot engage themselves in the series for this very reason. They may have nothing against the story, characters, or themes, but rather can't get behind the writing style. (I personally enjoy the books, but have my grown-up quibbles. Was "H" the Letter of the Decade?) The films present an opportunity for this population to consume the tale without having to read books to which they may not respond.

Fans of the books will likely argue that I've forgotten the largest concession of adapting the books to film: the loss of the imaginative quality. I will not deny that, whenever a beloved book finds its way to the ol' silver screen, something is lost. Perhaps Mad-Eye Moody doesn't look a thing like you pictured him, or Quidditch seemed so much more dangerous and rugby-like in the books, or you can't stop making googly eyes at Alan Rickman long enough to accept him as an appropriately pseudo-villainous character. These are all valid concerns, and ones I personally share. Rowling's work is so inherently grand, though, that it screams to be cinematically realized. Everyone won't be happy with the results, but what is there in life that will please everyone? The filmmakers have had to keep the best interests of both the Hollywood machine and Harry fans in mind. The results appear to have pleased both parties to an extent that adaptations seldom reach. Ultimately, the films are not high art, and I'm not arguing that they are. They do, however, make approachable a story that is a large part of our cultural conversation. They encourage discussion, literacy, and debate.

Also, I once went to a midnight showing where they served butterbeer. There are very few situations in which that's appropriate, and the seventh of those situations opened in theatres today.