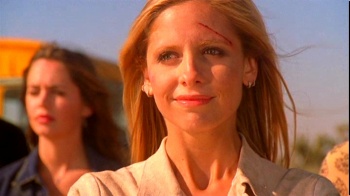 Yesterday, Warner Bros. announced that it would be rebooting Buffy the Vampire Slayer sans creator Joss Whedon. The internets have exploded, with proclamations of undying allegiance to Whedon butting up against pshaws of "oh, get over it." Television columnist Kristin Dos Santos emailed Whedon for his reaction to the news, and between the joshing gibes and spiky jokes, he responded, "I don't love the idea of my creation in other hands, but I'm also well aware that many more hands than mine went into making that show what it was. And there [are] no legal grounds for doing anything other than sighing audibly. I can't wish people who are passionate about my little myth ill." Many of the people to whom Whedon refers are the ones firing up their keyboards right now, shooting down every word raised about the new film. Not to join them, but I doubt that Buffy can be reworked, ground down, or gritted up in any way that might resonate more than the series did. To these fans, myself included, Buffy the Vampire Slayer as it appeared on television between 1997 and 2003 was probably the most empowering, honest, and entertaining anything Buffy can be. It is a testament to the show's strength to say I'm skeptical about the film's potential success.

This is what everyone is going to be thinking anyway, so I'll get it out of the way now: Yes, I'm a girl. I think Buffy is a good and important role model for girls. I deeply appreciate that she kicks more ass than anyone. My appreciation goes further than these blanket statements, though; I adore that they didn't make a deal about it. Buffy is empowering because it doesn't try to empower. It just exists, and drives its message home through its existence. Buffy's femininity is able to coexist with her ass-kicking, and I can count on both hands the number of times in all seven seasons combined it's made an issue, for good or ill. It's simple to feature a strong female character, it's pathetically simple to write a feminine female character, and both of these things have been done well in other films and television shows.

Most works that combine the two all too often find themselves apologizing for one or the other, or feature our heroine struggling to reconcile her strength with her femininity. All this does is send the message that strength is not feminine, and that it's unusual for the two to coincide. Buffy struggles with being the slayer, sure, but with the responsibility of being Chosen, not the powers accompanying it. Seldom is there any big whoop raised that this petite woman is wailing on demonic entities three times her side, because in this universe, it's understood. Buffy does not represent the ultimate in enlightened television, but Buffy Summers as captured on television is the best example I have yet seen of a female action hero. That's going to prove a tough act to follow.

Whedon pitched Buffy as a metaphor of sorts: high school as horror movie. For the conceit to stand, one of those two central concepts has to be grounded in realism, and the writers rightfully chose the former. The resultant realism and honesty in Buffy's relationships is staggering. The show follows its Scoobies through high school, college, and young adulthood, and the relationship evolutions ring true throughout. Look at "Dead Man's Party," near the beginning of Season Three. Buffy, who in the Season Two finale was forced to send her vampire boyfriend into the gaping maw of hell in order to save the world, ran away to Los Angeles, unable to cope with her situation at home. "Dead Man's Party" details her reception upon returning home to her friends, family, and life as a slayer. Not a realistic situation, per se, but this episode is not as notable for its plot as its dialogue and character development. Buffy is distraught from the entire ordeal, and her friends and family are hurt that she ran away, rather than confide in them. Relationships are strained on all sides, and no one is really speaking to one another.