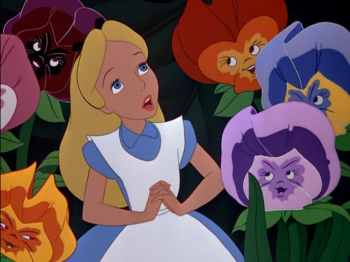 Yesterday, Steve Butts discussed why movies will always be better than the video games they spawn. I'm going to take his argument one step further, and posit that the books from which those movies were adapted are themselves superior to the films.

Whenever a book is adapted into a feature film, two cries of anguish rise from the populace. One faction wails that the movie looks nothing like their book-induced imagination, the other whines that crucial, relevant details were altered or omitted in the process of adaptation. Both of these are valid complaints, and are all-too-frequently seen when a book transitions from page to screen. These are just smaller facets of a larger issue, though. The real issues at hand in the impossibility of spanning two wildly different forms of storytelling are narration and choice.

The last book I read was The Yiddish Policemen's Union, by Michael Chabon. It's excellent, and I recommend it highly. I read the book over the span of a couple weeks, because to fully appreciate the work, I needed to set aside the time. I reread passages with particularly well-done imagery, which wound up being nearly all of them. I took my time to absorb the intricacies of the narrative, the visceral nature of Sitka, Alaska, the book's setting, and the ramifications of dialogue and plot progression. It was an immersive, personal experience.

If The Yiddish Policemen's Union were to be adapted into a film, all of those experiences would be lost. I would be bound to the pace of the filmmaker if I saw the work in a theatre. It's true I could rewind and rewatch if viewing the movie at home, but instead of pulling me deeper into the world of Sitka, I would be removed, torn from the escapist nature of movie-watching. I would be divorced from the narrative, as films seldom feature a narration as thorough as the book on which they were based. For example, much of Lolita's subtlety is lost in its transition to film, as the book relies so crucially on its first person narration. This accounts for the substantial flaws in both filmed versions of this classic.

Movies can usually capture the dialogue, as this transition is simple, and the setting, also simple if it is not fantastical. Color and tone might be true to the book, but not to my reading of the book, and while other interpretations can be both enlightening and engaging, the personal aspect is gone. The film is not set, for example, in my Middle Earth. It would be the director's, the producer's, hell, it could even be Tolkien's own vision of Middle Earth, but it could never be the same as the one I've experienced. This is a common complaint about the Harry Potter films, that they don't accurately capture each individual's personal interpretation of, and relationship to, the text.

In the transition from book to film, the two biggest losses a story can suffer are narration and choice. Narration is responsible for the complaints of the fans above. Narration provides color, context, and point of view. The vast majority of this information is supplied in narration, as it's seldom a character looks around and notes, "Wow, it's the best of times and the worst of times!" or "You know, it really is a dark and stormy night." Choice comes not only in interpretation, as films are also subject to varied personal understandings, but in consumption. I can largely decide how thoroughly and quickly to consume a book, and these choices don't follow the story to the screen.

These two hang-ups are why there has never been a definitive film version of Lewis Carroll's Alice's Adventures In Wonderland, for example. There are classic versions of this film, and some have come close, but it takes more than lifting dialogue, plot, and physical description to make a successful adaptation. The allusions to historical figures, the mathematical and chess-based allegories, and the darker tones of the lighthearted work have never successfully made it to film. Indeed, most of these jokes and allusions are visual wordplay, and cannot translate accurately to the spoken word. These are subtler than plot, and require a deeper reading, a choice to delve more deeply into the text. The tone is largely lost with narration, and the biggest loss therein is the reader's sense of place: Reading the book, one is mired in the same nonsensical universe as Alice struggling to find footholds in rocky terrain. Film adaptations turn us into passive observers, and our understanding of Alice's experience is diminished.

There have been excellent films adapted from literary works: Pride and Prejudice, The Lord of the Rings, yes, the first Harry Potter film, sure. Even Disney's animated Alice in Wonderland comes reasonably close to the spirit of the original. That phrasing should be indicative of the inherent flaws in the process. If it's "the original" that possesses "the spirit," the replication is always going to be a lesser thing.