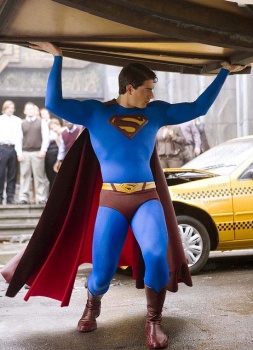 Feature-film adaptations of comic books are flying fast and furious right now. There were over 40 in the past decade, and that's only counting those I could remember. There are over a dozen slated for release in the next three years, and there's no doubt in my mind that more will be announced, as they have been thus far, seemingly every day. So comic book movies, and specifically superhero movies, are enjoying their day in the sun. Why is that day today? There's an obvious trend that the studios are cashing in on, but why are these films resounding with the populace right now? I have a few theories, and they all relate to the often-depressing state of the world today. Superheroes give us regular folk hope, show us how we can help, and provide us an escape when we can't.

Our world is consistently and indefatigably plagued with enormous problems, ranging from poverty and famine to genocide and war. There may not be a world war on as it's been defined for us in the past, but that doesn't mean the world is not at war. Nations are hostile, armies are engaged, and people are dying all over the world. History tells us that superheroes are created or, if they already exist, experience resurgence during times of war. When an opposing army is at our door, it's comforting to take solace in the idea of unlimited power and unquestioning morals. Superman is what we want, and movie studios know this well.

The current popularity superheroes are enjoying is at least partially due to this current state of combat. If that weren't sufficient, widespread natural disasters, massacres, and terrorism have brought the world down. The years 2000 to 2010 have changed the world in a frightening way, and I often feel helpless about it. I'll wager that I'm not the only one. Helplessness is the real issue that the superhero movies address, and they do so in a surprisingly proactive way.

Superheroes represent all that is good about the human race, even if they themselves are alien. They represent hope, strength, and a super sense of morality. The more fantastical heroes, like Superman, or Dr. Manhattan or J'onn J'onzz, could make a dramatic difference for the better in our warring world. When we see a movie with such a hero, we can sit in the dark for a couple of hours, and get the sense that problems can be solved by those greater or stronger than ourselves. Sometimes that escapist surrender is enough to raise our spirits, and to give us the hope we need to see things are bound to improve. Sometimes, though, that hope isn't enough, and we realize there isn't an alien boy scout or a big blue nude superpower coming to save the day. Heroes like Batman, Kick-Ass, and V have us covered there. These heroes reach out and empower us. They exemplify the adage that ordinary people can make a positive difference, no matter how overwhelming the crisis at hand. We can perform extraordinary acts of courage and power, all we need is strength of conviction and the initiative to try.

Superheroes give us hope that the world can be fixed, no matter how screwed up it gets. Hell, they're able to solve crises on infinite earths, and we can't fix problems on just one? We're slacking here, guys. Superheroes help us look at the world through more optimistic eyes. These movies emphasize that one individual can make a difference against great adversity, and there are many individuals right now in need of such inspiration.

I don't need to tell you employment is difficult to come by right now. The United States Department of Labor Statistics reports a 9.8% unemployment rate for November 2010; the United Kingdom's Office for National Statistics lists a rate just under 8% for September of the same year. Canada's Labour Force Survey boasts the lowest rate since January 2009, but 7.6% is still awfully disheartening. Having recently been there myself, I can speak to the awfulness that is unemployment, but in many cases, not having a job results in genuine despair. People all over the world are unable to distinguish themselves in an over-saturated job market, with the result that no one is getting hired. This has ramifications everywhere, and in many more important markets than entertainment, but entertainment is affected as well.