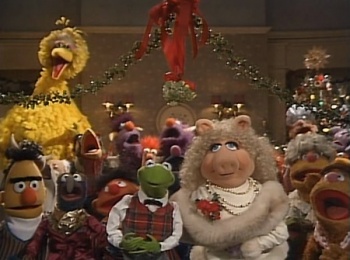 It's the month of December, and we know that means:
Holiday specials on all TV screens!
The Frostys and Santas and Rudophs are here
To brighten the month with their cute, shiny cheer.
But geeky among us may feel underserved,
Sans holiday specials we know we deserve.
So here are a few nerdy holiday shows
To fill living rooms with that warm, cheery glow.
If you're watching old seasons on a DVD,
Or streaming the episode, there's sure to be
A holiday special to fill every need
Of geeks of all interests, obsessions and creeds.
Please note that in sharing these holiday treats
There may be some spoilers, so if you're like me
And wish to refrain from knowing what's to come,
You now know to simply scroll right past that one.

This is my one Christmas viewing tradition, and is the source of the most rage and disappointment. A Muppet Family Christmas was a 1987 television special. The central Muppet cast -- Kermit, Fozzie, Gonzo and the gang -- are spending Christmas at Fozzie's mother's home in the country. The Sesame Street Muppets join the party, and the Fraggles make an adorable appearance. Every Muppet ever stitched is gathered together, celebrating the holidays. At the very end, Jim Henson shows up and fondly watches the whole crew singing merrily, saying "Well, they certainly seem to be having a good time...Yeah, I like it when they have a good time." That's when I start bawling. It's a holiday tradition.

It's also the most frustrating part of my holiday, because I have to watch the whole damn thing on YouTube. The rights to some of the film's featured carols were only obtained for the television airing, and so the extant piece is not available for purchase in the United States. An edited version is for sale, but those carols are cut, it's missing the scenes in which those songs appear, and it's just a disappointment for anyone familiar with the glory of the full film. I was two when the special first aired, and thankfully my parents recorded it, but I wore out that VHS years ago. Every now and then, versions advertised as "complete" pop up, but they're either lying or trying to sell me something in a non-US friendly viewing format.

I can promise you, though, that the payoff of watching this on YouTube is worth the frustration. To see the Swedish chef working out how to cook Big Bird, or the Fraggles exchange gifts with everyone's favorite frog, is to know exactly what "warm and fuzzy" feels like.

"Amends" and "Bring On The Night," Buffy The Vampire Slayer 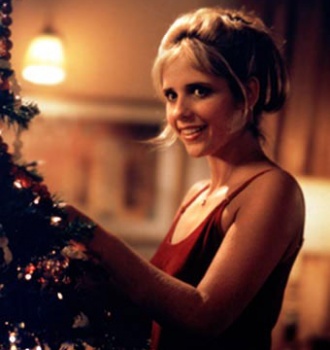 These episodes aired with three full seasons between them, yet their similarities and parallels are such that they can almost be watched as one two-part holiday special. Both deal with the same Big Bad, both deal with issues of sanity and belief in others, and both fall just before Christmas in Sunnydale.

"Amends" takes place in Season 3, and is our first real introduction to The First, or the first evil. The First can't take corporeal form, but can sure as heck hop into the guise of a dead person, and does just that in order to screw with people's heads. In "Amends," the victim is Angel, to whom The First appears in the guise of the vampire's many victims. This haunting predictably begins to drive Angel mad, and pushes him to the brink of suicide (a pretty passive suicide, though: standing outside on Christmas Eve, waiting for the sun to come up).

The concept of The First, the one who ever was and ever shall be, throws out some religious overtones, but it's the idea of redemption and belief in others that sets this so nicely at the holiday season, and at the year's end. People are lonely, looking back on this year, and, in this case, their lives, with ample regret. It's Buffy's belief in Angel's redemption and inner good that saves him. This episode also features some terrific bitter Willow ("not everyone worships Santa"), rare and convenient Sunnydale snow, and the symbolic locating of the villain's secret lair by means of a patch of dead Christmas trees.

"Bring On The Night" picks up right where "Amends" ends, except for, you know, the three seasons in the middle. The First has returned as the ultimate Big Bad, only this time it's torturing Spike, and the torture is much more than merely psychological. There's a nice twist on the theme of redemption form how it popped up in "Amends." When Angel ran up against The First, he wound up rejecting Buffy's faith in him, preparing himself to die rather than trust that he was a good man. When Spike is tortured by The First, it's his insistence that Buffy believes in him that keeps him going, and prevents him from breaking. "Bring On The Night" deals with Christmas less overtly, but the evolution of previously established themes and characters make this fascinating follow-up to the Christmas creepiness and cheer of "Amends."

The shirtless Spike -- well, just consider that a little gift from me to you. Enjoy.