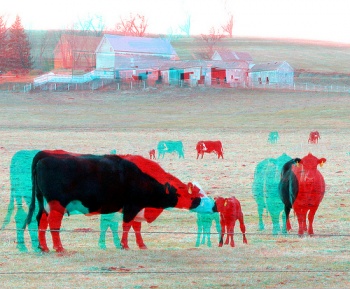 Two days ago, Star Trek's Wil Wheaton tweeted, "Wouldn't it be awesome if there were, like, a whole bunch of 3-D movies? I mean, just terrible stories and ideas, BUT IN THREE DEE. OMG." I wanted to retweet it to the whole damn world. Why do we fall all over ourselves to pay hefty surcharges to wear some wonky plastic glasses and get a headache and a distracted movie-going experience? Not every two-dimensional medium needs to be seen in eye-popping 3D, but the movie industry in particular doesn't seem to agree with me. More dimensions means more expensive tickets, and people are buying them left and right. Was Step Up 3D any better because it was 3D, or was it just a bad movie all up in your face?

3D has become a blanket under which mediocre projects can huddle, hoping the public will be distracted from plot holes and poor acting by the presence of in-their-face explosions. Well, said projects, time to get out of bed and face the world. 3D is a novelty with enough negative side effects (any, really) that it's a wonder we've put up with its overuse for so long. Now, I'm an old fogey who thinks 3D in general is an unnecessary interloper, but even I can acknowledge it has a time and a place, and they aren't "always" and "everywhere."

I have enjoyed a 3D movie or two in my time, don't get me wrong. How To Train Your Dragon was a charming film, and one where the 3-dimensional effects enhanced how the movie was able to tell its story. The added dimension was most effective when used to follow characters in flight on a dragon's back. The tone of the scene was informed by my own much more visceral understanding of what flying on a dragon's back might be like. It would have been just as charming in 2D, but the additional dimension heightened my movie-going experience.

I've also enjoyed movies that I happened to see in 3D, but there's a difference. I make no secret of my love for Pixar, and have seen Up and all three Toy Story films with a second pair of specs. Pixar approaches 3D a little differently, and the added dimension is used not to pull the screen out towards you, but to bring you in, to enhance depth and detail perception. Is it fascinating? Hell yes - they work endlessly on their tiny details and in-jokes, and it's exciting to see them. Will I pay to see a Pixar film in 3D again? Not unless I am the beneficiary of an unexpected windfall. There's a difference between a 3D movie and a movie released in 3D, and it's that the former needs the added dimension to function as a film. There aren't many of those being released, and yet it seems that every listing at my local movie theater includes a 3D option. For pete's sake, the new Thor trailer turned the line around, advertising "[in] 2D in Select Theatres." Excluding attractions at Walt Disney World, I would be hard pressed to think of any movie that needed to be in 3D for it to work.

I understand that technology needs to evolve, and am thankful my old Walkman bowed out so that my iPod could take its place as my personal music provider. The question that should always accompany a tech evolution is its relative necessity. I say "relative" because I acknowledge iPads, for example, are by no means necessities, but their existence helps evolve the technology of the portable computing device. I don't think that the added dimension, as it exists now, is enhancing film as a medium, or aiding its evolution. It's just changing our consumption, and substituting "oohs" and "aahs" for thoughtful analysis.

The rapid proliferation of 3D has me not only annoyed by its mis-and overuse, but worried for the health of our collective optic nerves. As a glasses-wearer, I come to the table a little prejudiced towards 3D films. I prop the 3D glasses over my own, and within an hour, I'm rocking a pretty spectacular headache, and know people with "normal" vision who experience the same woes. This has been a blight on the novelty of 3D since the days of the red and blue anaglyph glasses. Today, though, people are taking this unnecessary effect to new levels. Did your parents ever tell you, "don't sit so close to the TV, you'll ruin your eyes"? Sitting in a living-room proximity to a three-dimensional television, wearing glasses that force your eyes to see images as other than what they are, seems a recipe for a generation of the near-sighted. Why does the average home need to see commercials for carpet cleaner and gross old politicians in 3D? Why on earth would I need a 3-dimensional digital camera?

I love to cook, and when a recipe calls for wine, often (this obviously depends on the recipe) you'll want to use a wine you wouldn't mind drinking. The general rule of thumb is if you wouldn't drink it, don't cook with it. I would like to extend this to filmmakers: Generally, if you wouldn't make the movie in 2D, don't make it in 3D. The added dimension won't save your film, but it will probably waste a lot of your money and certainly give me a headache.