I'm traveling to see family over the holidays, and after we've had dinner and played that steal-other-people's-white-elephant-gifts game, we usually pop in a movie. Problem is, by this time, we're all so sick of Christmas we could scream, but it feels somehow wrong to watch a non-holiday film. Well, family, I've got our solution: We're going to watch a non-Christmas Christmas movie this year.

These films are all set during the holidays, and the season nominally informs the plot, but they're really regular, awesome movies that just happen to take place at Christmas. There are dozens of these -- Gremlins is a particularly trippy choice -- but here are my favorites, listed in the order in which they're least likely to offend my grandmother. 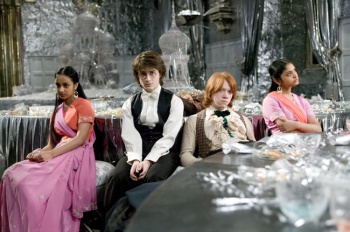 I say simply Harry Potter because more than one film applies. Most of them have a holiday scene, some more prominent than others (the Yule Ball in Harry Potter and the Goblet Of Fire comes to mind), and John William's blustery score in Harry Potter and the Sorcerer's Stone has become synonymous with snow swirling around the spires of Hogwarts and long scarves flapping in the breeze.

Largely, though, there's nothing specifically holiday-based about these films at all; the benefits of holiday viewing stem from the plot itself. Harry's loss of his family makes us want to hold ours closer, and the message of love being the most powerful magic makes us feel all warm and fuzzy. What are the holidays about, after all, if not magic, candy, parties, and awful sweaters knitted by your roommate's mom? This is my best bet for non-Christmas Christmas viewing, the epitome of family viewing, as grownups find it charming, and kids love all the magic, and I still classify myself as a kid in this regard.

A tiny cheat, as this is really more of a New Year's movie. If Christmas decorations go up at Halloween, though, then I feel justified watching a New Year's movie one week early. It's a film about new beginnings and positive action, and manages to imbue itself with those values without becoming a piece of holiday schlock. There's also a really cute baby, which always makes me think of baby New Year, because I'm apparently a big sap.

Ghostbusters 2 gets a lot of crap, and I freely admit it isn't as good as its predecessor. As the risk of losing a few good opinions, I like Ghostbusters 2. The cynic in me likes that Bill Murray and Sigourney Weaver haven't been living happily ever after, the optimist in me likes that positivity transforms the ectoplasm and saves the day, and the intelligent human in me likes that Peter MacNicol is alive, and well, and playing Janosz Poha. (Everything you're doing is bad. I want you to know this.)

This is the movie of the season for me: Cold and nerdy, with a little bit of explosive and a lot of Bruce Wayne. The holiday setting establishes tone, and serves as catalyst for plot advancement and a character development. Batman Returns is icy to the core, from its cool, limited color palette to the frozen brutality of businessman Max Shrek (Christopher Walken) to all the penguins scuttling around at the final confrontation. If that doesn't do it for you, the creepiness of Michelle Pfeiffer's rapid, rabid transformation from Selina Kyle into Catwoman should elicit a shiver.

The loneliness of the holidays takes a toll on both Wayne and Kyle, and informs their relations not only as Batman and Catwoman, but as their civilian identities as well. The Christmas framework lends gravitas to Oswald Cobblepot's tragic backstory, and by extension, his biblical pillaging of children. So it's a Christmas movie on one level, but on a bigger, much more important level, it's a Batman movie. Enough holiday to satiate my family, enough I-still-don't-understand-why-I-find-Michael-Keaton's-Bruce-Wayne-so-attractive-but-I-really-do Batman for me.