As Walter Kovacs warned us, the end is nigh: I heard my first diet advice this morning, on the radio. (It said to eat right and exercise. Shocker.) Yesterday, I addressed the savory side of science fiction and geek media, and now it's time for the sweet.

Three days until the new year. Make them count. 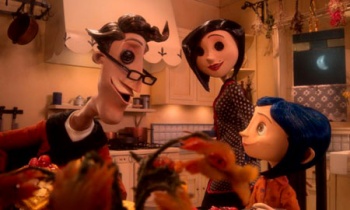 "She's as cute as a button in the eyes of everyone who ever laid their eyes on Coraline!" Coraline

I'll be honest with you, life with Other Mother and Other Father does look pretty appealing. A gorgeous garden, catchy tunes, a rodent circus, and a talking cat, topped off with some sweet parental attention. The buttons thing is pretty creepy, though, so I think I'll pass. On those buttons, I mean. These edible ones? Keep 'em coming.

This recipe makes about two dozen miniature cupcakes. If you don't have a mini muffin tin, don't fret; just make full size cupcakes, and bake them for about 13-14 minutes. One additional note: These cupcakes are actually gluten-free, but you'll never miss the flour. Cross my heart and hope to be kidnapped by my Other Mother. 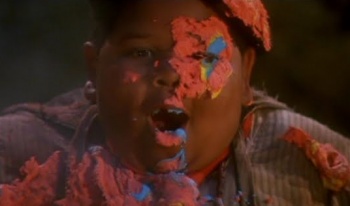 "Eat what? There's nothing here. Gandhi ate more than this." Hook

This is one of the only scenes in Hook in which I don't break into bizarre fits of weeping, so it's one of my favorites. I'll admit I've never been much of an icing girl, but I've never had a raucous food fight with it in a fantastical treehouse, so maybe I'm missing out.

Everyone I know, it seems, loves frosting, and could eat it on its own with no cake-based means of conveyance. They also think I'm nuts for not doing so. Just this once, I'll take their advice and offer up this indulgent buttercream frosting. It'll stay visible whether you pretend or not, but will show up better on everyone else's clothes if you add a little food coloring.