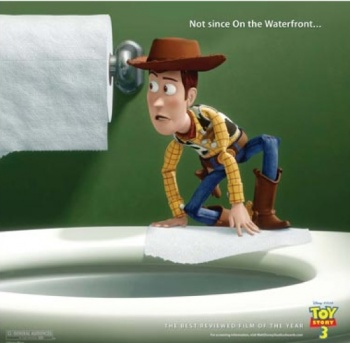 This isn't the first time I've said this, and I guarantee it won't be the last: Toy Story 3 was the best movie I saw in 2010. Disney/Pixar knows a lot of people have been saying the same thing, and most of them are much more influential than me. It's decided this is the film to bank on, and to that end, it has been offering it up for the Academy's consideration for Best Picture at the upcoming Academy Awards. I won't say it should win, but Toy Story 3 deserves at least a nomination.

There's not a lot of precedent for an animated Best Picture nominee. 1991's Beauty and the Beast was the lone nominee until last year's awards, when 2009's Up was one of ten in the newly re-expanded Best Picture category (five was the limit prior to that). There's nothing preventing an animated film from being considered by The Academy of Motion Picture Arts and Sciences for this award, the rules simply define "best picture" as "best motion picture of the year."

In 2001, the Academy introduced a "Best Animated Feature" category, which provides the opportunity to recognize animated works without taking awards opportunities away from live-action motion pictures. This allows more animated works to be recognized, but also lets the Academy gloss over genuine achievement in filmmaking by neglecting to consider these works beyond their animated status, lumping in works such as Ratatouille and Persepolis with Surf's Up, as happened in 2007 (Ratatouille won). Then again, some years, the categories are chock full o' ringers, such as 2010's lineup of Up, Coraline, Fantastic Mr. Fox, The Princess and the Frog, and The Secret of Kells (Up won). The category's existence has its advantages, but largely maligns animation as a filmmaking medium. Animation deserves better, and Toy Story 3 deserves acknowledgement as a film, period.

The following paragraphs contain spoilers. If you haven't seen Toy Story 3, know, first, that we can't be friends until you do, and also that you may want to scroll until you see the words "It's safe."

Toy Story 3 is a masterpiece. The preceding Toy Story films were mostly about the toys, with some Andy, Sid, and Al thrown in to move the plot along. 3 gives us the most human/toy interaction of entire series. Even in the grainy first moments of video footage, Andy's surprising acceptance of baby Molly lumbering into his room shows more about the generosity of children and the wealth of their imaginations than the toys could ever tell us. Watching Bonnie interact with her toys sparks the child inside all of us, no matter how long-lost, and the final playtime, with Andy and Bonnie zooming around the yard, elicited more sniffles in the theater than the climactic incinerator moment.

Not only did TS3 top its predecessors in terms of human/toy interaction, but it brought out the most humanity in the toys themselves. Watch that incinerator scene. Once Lotso escapes the conveyor belt, the film begins to build to the darkest moment in the franchise, and in Pixar history. From the moment Buzz realizes the upward struggle is futile to the sudden appearance of the claw, 57 seconds pass. Toy Story 3, ostensibly a children's movie, provides nearly a full minute, free of dialogue, in which the protagonists prepare for their seemingly inevitable deaths. The moment is unsparing in its bleakness, yet is still somehow sweet, rather than bitter. The toys' salvation comes from the claw, a moment inspired by events of the first film. It provides relief, giggles, and closure, all of which feel fully earned. The humans are allowed to be human, and if this were Pinocchio, the toys would all be little boys and girls and pigs and potatoes by now.