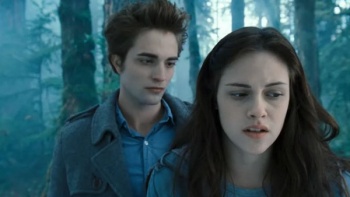 Well, humanity had its say this week. People's Choice, the appropriately named organization behind the People's Choice Awards, celebrated the favorites of what their website insists on calling "real people." The big award of the night, "Favorite Film," came down to five movies. Alice in Wonderland, Inception, Iron Man 2, Toy Story 3, and The Twilight Saga: Eclipse. Guess which film took the top honor? Eclipse also defeated Inception and The Social Network in the "Favorite Drama Movie" category, while Adam Sandler's Grown Ups snagged the same for the people's favorite comedic -- I'm sorry, "comedy movie." The PCAs have a longer history than one might expect, and have awarded some genuine talents in their day. Since the advent of the internet, the once-fresh concept has become routine, and thus redundant, and no one who should care (those being awarded) does.

The People's Choice Awards were first awarded in 1975, when they probably carried a bit more weight. Originally, Gallup public opinion polls were used to cull responses and determine the winners. Previous winners include John Wayne, Mary Tyler Moore, Barbra Streisand, and The Sting. As time passed and technology evolved, we began using the internet socially, sharing our interests and preferences. Fans had more avenues with which to interact, and the digital world provided countless venues in which to air opinions.

Today, PCA voting takes place -- where else? -- online. Social media and internet polls allow folks like you and me the opportunity to decide which stars will walk away with a nondescript crystal award, and we can vote on what the award looks like, too! If I didn't already have the ability to vote on who wins a million dollars, or a singing career, or another 15 minutes of fame, this might hold some interest. In an age where the public can decide just about anything, though, the PCAs hold considerably less interest, and not just to me.

Entertainment Weekly, in their overview of this year's awards, concluded that there is no way that the winners aren't informed of their victory in advance, theorizing, "The stars don't want to piss 'the people' off by looking like they can't be bothered to accept an award from them, but there's no way they're going to show up to get stiffed by them." Okay, so stars know in advance. They show up, they thank the fans, they accept their awards. This hurts no one; the films, television shows, and stars that might care about the PCAs, like Eclipse, $#*! My Dad Says, and Zac Efron, are unlikely to be taking home any more prestigious awards anytime soon. I doubt these immensely popular properties are hurting for real people's praise, though, so why have the awards? I would have to be living under a rock in an unpopulated barren landscape to not know that the Twilight movies are wildly popular, and it comes as no surprise that Taylor Swift is everyone's favorite country star, or Rachel Ray their preferred TV chef. Why waste the time, energy, labor, and money it takes to televise these awards? What on Earth is the objective, other than to award pity prizes to popular things?