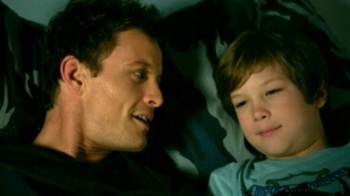 Vince is in the garage, wailing away on his punching bag when Trip, his son (not Bristol Palin's, I think she spells it differently) comes in with his little fists all taped up, ready to fight. Adorable. He joins his father at the punching bag, and Dad takes a minute or two to correct his form. They bond a little, Dad promises to make the bad guys go away, it's probably supposed to be touching. After the little tyke has hit the sack, Vince and wife Dana chat about ARK Corporation's plan to fully privatize the city's law enforcement within the next six months. Should Vince interview for a privatized cop job? It has benefits! And time off! What will he do?

Cut to Vince striding into the fancy-pants ARK lobby to have his interview with CEO Peter Fleming. Despite Vince's horrific mop (Never wear your hair like that anywhere you'd like to be taken seriously.) and the fact that the interview consists of two insults, a clumsily dropped bit of exposition, and not much else, Vince gets the job. He's a new member of ARK's privatized police force. This can only be a positive development in his life.

Now we're outside the Faraday home on what has turned out to be, I kid you not, a dark and stormy night. (I would love to get a hold of this script and tally up how many times it uses the word "ominous." I bet it's a lot.) Vince and Trip are reading a comic book called The Cape behind Mom's back, because Moms are killjoys. Vince is reading the comic aloud, which is silly because Trip is obviously old enough that being read to is a little annoying, and what comic book features third person narration ("The Cape leapt through the flames! The arsonist sneered...")? It's a mess. Anyway, the last thing Dad reads before we're torn away from this scene -- because we've been here for a full twenty seconds, we can't linger any longer -- is something about the vermin of the city growing and multiplying, which sounds very Rorschach.

Vince, having tucked Trip in with his weirdly-written comics, is sitting down to check his email when his screen is suddenly replaced by a big rotating symbol, subtitled, "ORWELL IS WATCHING." A distorted voice accuses him of buying into the privatized police hype, and gives him a tipoff about a weaponized chemical explosive being smuggled into town that night. Why Orwell thinks he/she/it can trust the cop he/she/it just totally maligned is unclear, but Vince decides to trust the mysterious voice who totally hacked into his computer, and hightails it down to the docks.

Vince and cop buddy Marty are poking around in the big red storage units that always populate docks when they uncover the explosive -- yes, L-9! You remembered! -- in a shipment of Pammy Pees dolls, which promise hours of toilet-training fun. Marty cautions Vince to just take it easy with this discovery, then watches with what's probably supposed to be a conflicted look as his buddy is grabbed from behind and knocked out cold.

And now we have our first commercial break.