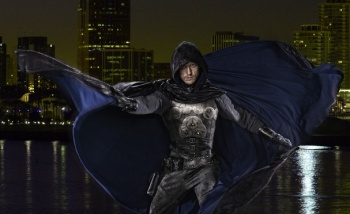 The Cape premiered on NBC last night. The premiere was two hours long, so this is a lengthy recap. If you're short on time: The Cape is about a framed cop trained by carnies who fights cheesy villains with the help of a blogger. If you've got extra time, well, the same thing, but I've got some more details, too. The show is organized under title cards, so I'll do the same. Here we go:

Our first moments with The Cape are a mite claustrophobic, and the director refuses to linger on a scene for more than a few seconds. Hey, it's only the very first episode of a new and conceit-heavy show, who needs a grounding sense of place or character, right? Our protagonist, Vince Faraday, is married, has a son of indeterminate age, lives in a boring upper-middle-class house where every room looks pretty much the same, is handsome in a nondescript way, and is a cop. That may have seemed like a laundry list of information, but that's pretty much exactly how the show laid it out.

Vince strolls into work one day and is almost instantly stopped by Female Coworker We'll Likely Never See Again, who is clickity clicking around on what she refers to as "Orwell's Blog" in a way that tells us we really should pay attention. Coworker tells Vince that Orwell's List O' Crooked Cops has been updated to include Fellow Cops X and Y; Vince glances up to see the gentlemen in question smiling shady smiles. Seriously, my notes from this read: "Cops on 'corrupt' list; well, durr, shady smiles."

Cut to the Chief of Police holding a little press conference, in which he talks about the city's corruption problems, then confidently foretells: "There's a new day ahead." He hops into his waiting car, only to see a dead woman (Female Coworker, no!) in the backseat. Whoops. The driver isn't his driver, but rather a man in a mask, with an accent and some crazy cat-eyes. I'll solve the puzzle for you right now: They're chess-piece contact lenses. Whenever Mr. I'll-Fill-In-The-Blank-In-A-Second wants to commit some costumed villainy, he takes the time to put in some thematically appropriate contacts, because he's committed.

"Chess," as he calls himself, tosses a hissing little canister in the backseat, so obviously labeled "L-9," you'd think it was product placement. Chief of Police begins to choke and die, and Vince, who was apparently head of security detail for this shindig, notices. He can't get into the car, though, so is just watching his beloved boss suffocate, or maybe be poisoned. The car then blows up in a well done explosion, with a pretty groundswell and everything. You may think that an odd aspect to note, but trust me: Embrace that explosion. It's pretty much the only good visual effect you'll get.